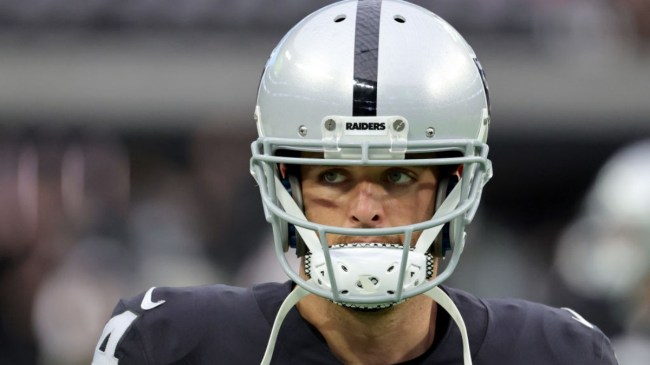 There may not be a single player in the NFL who was given more to be happy about this offseason than Derek Carr. Since the end of last season, Carr has signed a 3-year extension with the Las Vegas Raiders that will pay him $121.5 million. The Raiders also gifted him a reunion with a reunion with his favorite target from his college career, Davante Adams.

Carr has now revealed the part he played in the recruitment of Adams to the Raiders. When discussing the recruitment, he told ESPN’s Tim Keown, “Oh, man, I was egregious.”

The inside story of how Derek Carr got Davante Adams to take less money to leave Aaron Rodgers and reunite in Vegas. And what makes The Release King arguably the best wide receiver in the NFL

Carr confessed that he texted Adams the day after the Packers were eliminated from the playoffs.

Adams also revealed that he wasn’t all that surprised by what Carr wanted to talk to him about, saying, “As soon as I saw his name pop up, I knew what it was about.”

Luckily for Carr, he won’t have to worry about this revelation creating any tampering issues for the Raiders as the NFL’s tampering rules don’t apply to players.

Carr also discussed how different things are in Vegas with Adams in the building.

Carr’s “egregiousness” will be rewarded this season as he now gets to play with the best target he’s had in his NFL career.