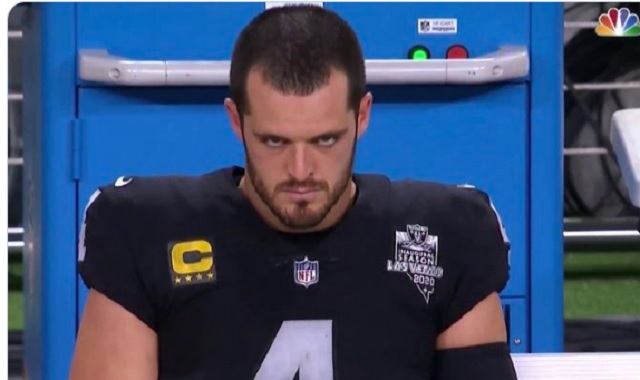 Derek Carr and the Las Vegas Raiders put up a fight against the Kansas City Chiefs on Sunday night.

Carr completed 19 of 23 passes for 242 yards and two touchdowns and was extremely focused on trying to get his team a win against his AFC west rivals.

Carr’s intense stare on the sideline late in the fourth quarter in the Riders’ loss quickly became one of the better memes on NFL Sunday.

Derek Carr is coming for blood on this next possession pic.twitter.com/dUkNPgwYhV

The undertaker looked liked this when he first debuted 30 years ago pic.twitter.com/I9C3weRtjq

Derek Carr when he sees the Chiefs on the schedule pic.twitter.com/f6MtQB7H05

Update Even Derek Carr got in on the fun.

On to the next one… pic.twitter.com/hEAhPArCww