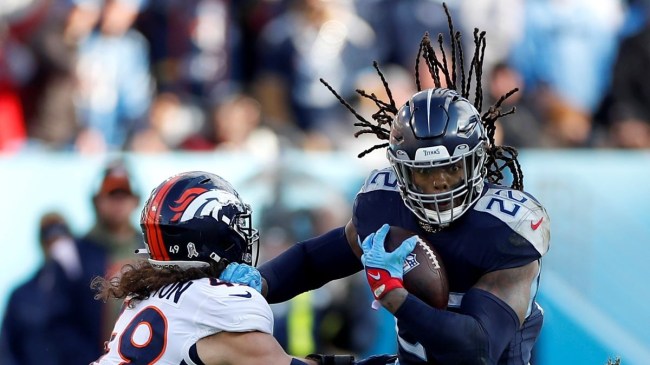 There are a number of great running backs in the NFL these days. From Saquon Barkley to Nick Chubb and Christian McCaffrey, the list goes on. But no running back in the NFL has the effect on his team that Derrick Henry has on the Tennessee Titans. Henry is the NFL’s best running back and has been for years, which has helped the Titans turn into one of the league’s best teams in recent years.

Henry has been breaking Titans franchise records left and right this season. But he may have outdone himself on Thursday Night Football against the Green Bay Packers. Henry carried the ball 28 times for 87 yards and a touchdown in the 27-17 victory. He also had two catches for 45 yards and a 3-yard touchdown pass to tight end Austin Hooper.

In doing so, Henry became the first player with at least 20 carries, two completions, a rushing touchdown and a touchdown pass in the same game since 1983 and the great Walter Payton. The legendary Chicago Bears running back ran for 161 yards on 28 carries, caught two passes for 27 yards and completed both of his two passes for 77 yards and two touchdowns in a 34-31 loss to the New Orleans Saints.

That one time Walter Payton threw two touchdown passes against the Saints just because he could.

The Titans are now 7-3 on the season and sit in a tie for first place in the AFC. In a year where no one player has particularly stood out of the pack, Henry is making a strong case for NFL MVP consideration. Quarterbacks have won the last nine AP NFL MVP Awards. The last running back to do so was Adrian Peterson in 2012.

But Henry has already made history a number of times in 2022. What’s one more history-making moment on the list? Soon enough, he’ll join Payton in the Pro Football Hall of Fame as well.