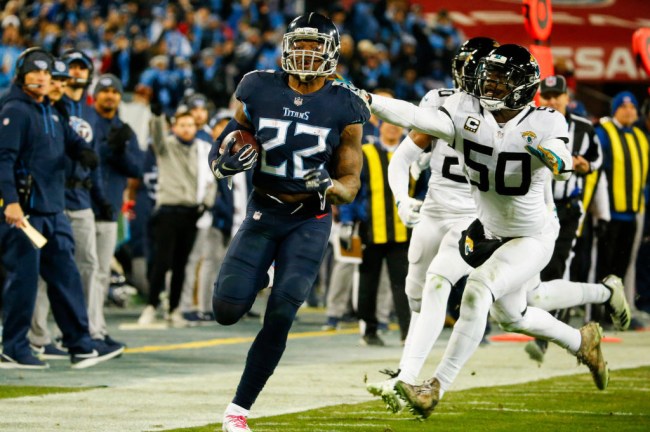 In a world filled with selfish people, especially in the world of sports, Tennessee Titans running back Derrick Henry provided a solid example of what it means to be a good teammate Thursday night.

After rushing for 238 yards and four touchdowns and ruining a bunch of fantasy football owners nights, both those who sat him on the bench and those who had teams playing against him, Henry had a shot at setting a Titans franchise record fifth touchdown.

With the Titans near the goal line later in the game, Henry told coach Mike Vrabel he didn’t want to go back in, and instead let Dion Lewis get the touchdown, and the reason why is pretty cool.

Speaking to Erin Andrews after the game, Henry told her, “We both gotta eat. I want to see him get a touchdown. I got 4. I care about my teammates.”

When Andrews asked him if he knew that he would have set a franchise record with a fifth touchdown, he said he didn’t, but even if he did he would still have wanted Lewis to score.

Henry did still set a Titans record with those 238 yards rushing, plus he tied former Tennessee Titan Chris Johnson as one of only two players to have both touchdown runs of over 50-yards and 90-yards in the same game.

That and he got shouted out by the guy he tied with his 99-yard TD run, Hall of Famer Tony Dorsett.

And Dorsett wasn't even supposed to get the ball.

Watch closely: Dallas had only 10 men on the field. FB Ron Springs, who was supposed to carry it, misunderstood the playcall and ran out of the huddle! pic.twitter.com/1hqYQknBRl

And even better, Henry got the honor of having his 99-yard run immortalized with the Jim Ross Treatment.