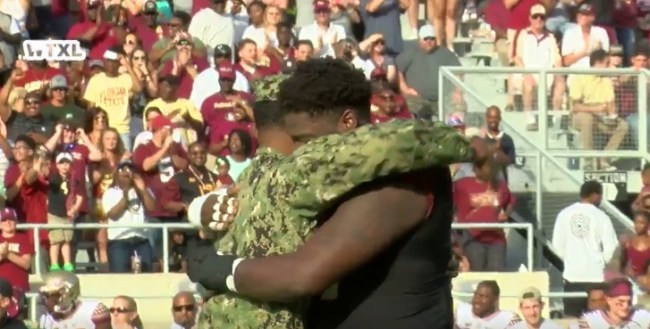 Show me a video of a person being reunited with a loved one in the military after an extended period of time, I’ll show you a man who cries and blames it on allergies.

On Saturday, Florida State offensive lineman Derrick Kelly was reunited with his brother and U.S. Navy officer, Derrickus, before FSU’s spring game. Derrickus has been stationed in Hawaii for the last two-plus years.

Before the game, Kelly watched a video message from his brother that played on the video boards in Doak Campbell Stadium.

“Sorry I couldn’t be there,” Derrickus Kelly said in the video. “Duty calls. Hopefully I’ll be able to see you in a couple of games during the regular season.”

At that moment, Derrickus started running out of the north end zone to greet his brother, who was running towards him as well. Fans gave the brothers a standing ovation and “U-S-A” chants began to circulate.

TEARJERKER ALERT: East Gadsden grad and @FSUFootball lineman Derrick Kelly got a surprise visit from his brother, who serves in the Navy and who Derrick hasn't seen in two years. @abc27 pic.twitter.com/sRsckW0vFr

“We cried a little bit out there,” Derrickus told the Orlando Sentinel. “I haven’t seen him in two years. There were times when all I felt like I had was my brothers. So it felt good.”