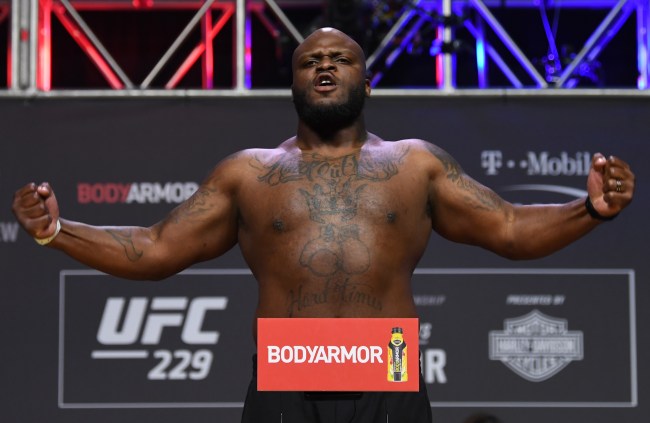 It’s not a very good idea to challenge Derrick Lewis to a fight.

On Wednesday, the 6’3″, 265 pound UFC heavyweight posted a video of himself knocking out a boxer who he claims challenged him to a fight at his gym.

When a boxers said he will knock me out because I’m a mma fighter pic.twitter.com/EjSeudMeQM

MMA journalist Ariel Helwani added a tidbit to the story about the fight barely lasting a minute.

Asked Derrick about this.

He said a boxer at his gym was talking “a lot” of smack about boxers vs MMA fighters. This happened yesterday. Lasted 1 minute, he said. https://t.co/K7R49cq2iF

MMA fans were in shock that anyone would challenge Lewis to a fight.

Of all people to fuck with, he choose Derrick Lewis. https://t.co/iBllKo3VCv

who in the absolute fuck tells DERRICK LEWIS they could knock him out???!!!!!! deathwish. https://t.co/5jhtSFCiLW

Someone actually thought it was a good idea to go to Derrick Lewis' gym and talk a bunch of shit. Quite a thin line between bravery and stupidity. https://t.co/XlH4d6jOL7

That guy has a death wish, how you trying it with Derrick… DERRICK Lewis https://t.co/VqdEUck0iw

Holyyyyyy…. why would you pick a fight with Derrick Lewis 😂😂😂 https://t.co/5utGLlFnF4

Derrick Lewis is a BAD man.