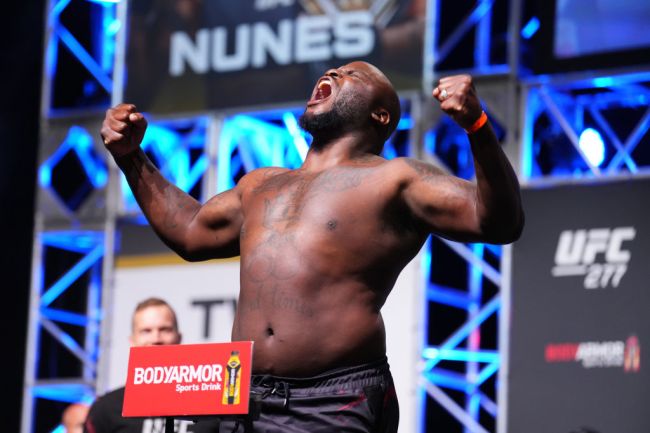 It’s difficult to truly pinpoint the moment Derrick Lewis interviews truly became something that MMA fans couldn’t miss. Many will point to the famous “my balls was hot” post-fight interview. However, there was a post-fight moment from even earlier in his career that was actually the first glimpse fans got of what Lewis had to offer on the mic.

That moment came all the way back in 2017. Lewis was still working his way up the ranks in the UFC’s Heavyweight division at the time, but was already becoming known for the insane power in his hands after scoring 6 finishes in 7 UFC wins.

That night, he was taking on Travis Browne, whose previous two fights had come against former champions in the division.

Lewis needed only 2 rounds to knock Browne out and afterward he only wanted to know one thing. Lewis wanted to know where Ronda Rousey, who is now married to Brown, was at.

Yesterday, Lewis once again found himself asking about Rousey. While interviewing Lewis, Daniel Cormier revealed that he had also recently interviewed Rousey. Upon hearing this from Cormier, Lewis asked “Did she ask about me?”

Unfortunately, Cormier had to give Lewis the news that Ronda Rousey hadn’t asked about him.

It surely won’t be something Lewis dwells on for too long as a married man with a big fight coming up this weekend.

Lewis takes on Sergei Pavlovich on the UFC 277 main card as he attempts to bounce back from a KO loss to Tai Tuivasa.

Pavlovich has won 3 consecutive fights since losing his UFC debut to Alistair Overeem. All 3 of those wins have come in the first round, so fans can expect fireworks between these two heavy hitters during the fight and might get fireworks from Lewis if he ends up being interviewed post-fight.