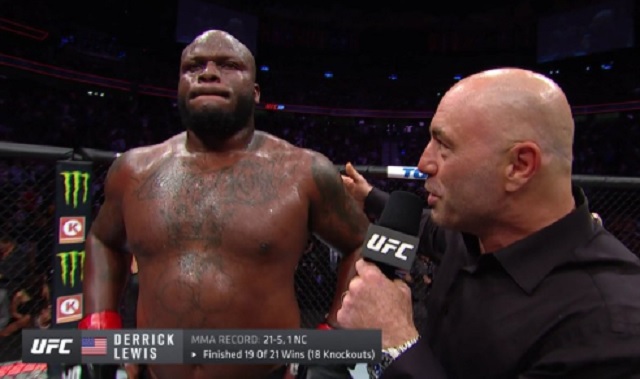 UFC heavyweight Derrick Lewis pulled off an improbable comeback win when he knocked out Russian Alexander Volkov late in the third round after Volkov had been dominating most of the fight.

What a fight Derrick Lewis was dead in that fight then he knocked out Alexander Volkov 👀😳😲😱#UFC229 pic.twitter.com/d8rYWpVJF7

After the fight Lewis gave us one of the post-fight interviews in the history of MMA.

Here is Lewis talking about why he took his shorts off after the fight “My balls was hot”.

Derrick Lewis is a LEGEND pic.twitter.com/akt143aUUu

Then Lewis explained how he remembered in the third round about Donald Trump telling him to “knock this Russian motherfucker out”.

I had forgot Donald Trump called me a few hours before the fight told me to knock this Russian motherfucker out, fuck Putin, USA in this hoe”

Lewis then closed off the show by saying he wanted to be invited to Joe Rogan’s podcast to smoke some weed.