Derrick Rose Fires Off At All His Haters, Says ‘Kill Yourself’ At Those Doubting Him After Tom Thibodeau Firing 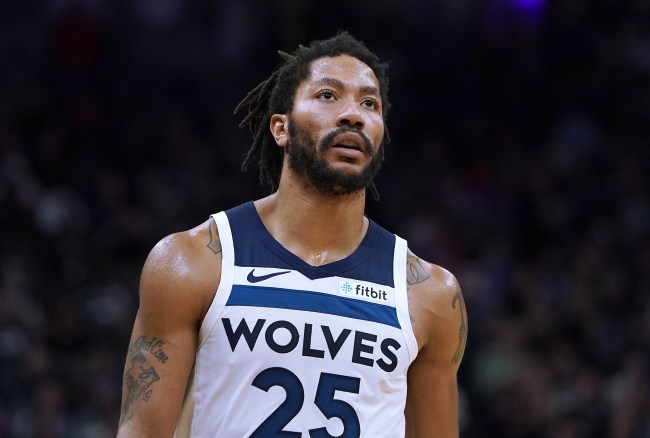 Derrick Rose is having a remarkable season for the Minnesota Timberwolves, showing that, even after all those unlucky injuries and age (30), the former NBA MVP can still perform at a high level. While the T-Wolves may be struggling this year, and just canned head coach Tom Thibodeau, D-Rose has shown to be a fan favorite, not only averaging 18.9 points and 4.8 assists per game, but even getting some “M-V-P” chants from the Chicago Bulls fans last week, proving that lots of people are pulling for him.

Thing is, with Thibodeau now gone, it’ll be interesting to see how it might impact Derrick Rose. That’s because the point guard was brought to the Minnesota Timberwolves last season, in part, because of his relationship with Thibs, who coached him while both were with the Bulls years ago, with Derrick Rose winning that league MVP award in Thibodeau’s first season at the helm in Chicago. And, with Rose being one of the leading vote-getters in this year’s All-Star Game, proving that he’s still got lots of game left, he wants to silent all those doubters and critics.

Unfortunately, Rose may regret the way he went about doing that. Rather than just let his game speak for itself, the point guard fired off an aggressive (and inappropriate) rant this morning, even going as far as telling those haters to “kill yourself” in response to a question about how he goes forward without Tom Thibodeau as his head coach now.

Here’s what Chris Hine, a Timberwolves writer for the Minneapolis Star Tribune, tweeted out about Rose’s reply.

Here's Rose, on how he goes forward w/out Thibs: "I have a lot of confidence in myself. Thibs was just the coach that believed in me. He jump-started my career again and for that I'll always be thankful, but for everybody that think that it's going to stop, kill yourself."

And here’s video of Derrick Rose’s comments to his haters.

Derrick Rose has a message for his haters pic.twitter.com/MQPr5qwPIR

Yikes. Probably not the best thing for anyone to say, especially a high-profile athlete like Derrick Rose, who will, undoubtedly, get ripped apart by people for this. I mean, Kyrie Irving got nailed for suggesting that the world was flat, and Stephen Curry was criticized for doubting that NASA ever landed on the moon, so what’s in store for Derrick Rose after these comments? One can only imagine.

After telling the media that he “doesn’t sell himself to people” last week after word came out that he was among the leading vote-getters for the NBA All-Star Game, Derrick Rose’s latest comments are further proof that he doesn’t care what people think, but, damn, he should’ve chosen his words differently. Here’s to hoping he’s able to apologize and learn from what he said to his haters earlier today, because it’s a pretty awful thing to say.