Deshaun Watson Set To Be Traded To Cleveland Browns For Multiple Picks, Get Massive New Contract 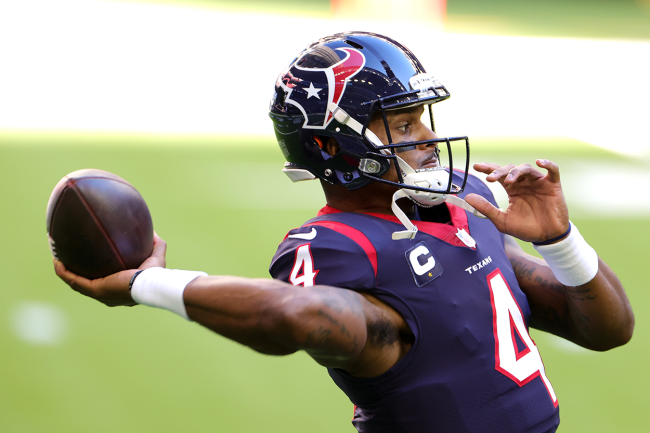 That is no longer the case. According to Adam Schefter, Watson has changed his mind and is headed to Cleveland.

Deshaun Watson has decided he wants to play for the Cleveland Browns in a stunning change of events, per sources. Watson has informed the Houston Texans that he now is willing to waive the no-trade clause in his contract to be dealt to Cleveland.

Watson, who is currently facing 22 pending civil lawsuits, was cleared of criminal charges earlier this month. As a result, the Watson sweepstakes were on.

Watson has a no-trade clause in his current contract with Houston and ultimately had final say on where he could end up. He met with Cleveland, Carolina, Atlanta and Houston and had reportedly eliminated the two former options— leaving the Saints or the Falcons.

Now, just a few days later, a deal is in place for Watson to be traded to the Browns. Cleveland is paying quite the price for NFL’s passing yards leader from 2020 and three-time Pro Bowler.

The Browns are trading three first-round picks, and two additional picks to the Texans for QB Deshaun Watson, per sources. Wow. Wow. Wow.

In addition, upon arrival in Cleveland, he is set to get a massive raise.

Browns are giving Deshaun Watson a new deal, per sources. The $184M over the first four years of this contract is a $48M raise over the $136M he was scheduled to make over the same four years on the previous contract – a $12M a-year raise in that span.

Every single dollar will be guaranteed, making it the largest contract with guaranteed money in NFL history.

This news is absolutely ground-shattering.

There is a chance that Watson will not be able to play in 2022. The NFL could choose to suspend him based on the pending civil lawsuits.

Cleveland is clearly willing to take that risk. They are paying a monstrous price, both to trade for Watson and to sign him. Should he get suspended, most of that money is still on the table.

Important contract note for Deshaun Watson, who got a 5-year, $230M contract. His base salary for 2022 is $1M, which means if he’s suspended, it’ll come out of that base.

It will be very interesting to see what happens from there, as the Baker Mayfield sweepstakes are set to begin in succession. After the Browns met with Watson, Mayfield requested a trade.

However, after Watson reportedly ruled Cleveland out, the team denied Mayfield his request. Meanwhile, the Browns tried to meet with Mayfield to smooth things over, but Mayfield refused.

Now that the team has acquired Watson, it is easy to assume that Cleveland will grant Mayfield his request and trade him out of Ohio. But, with the chance that Watson is suspended, maybe the team wants to keep Mayfield as a backup plan?