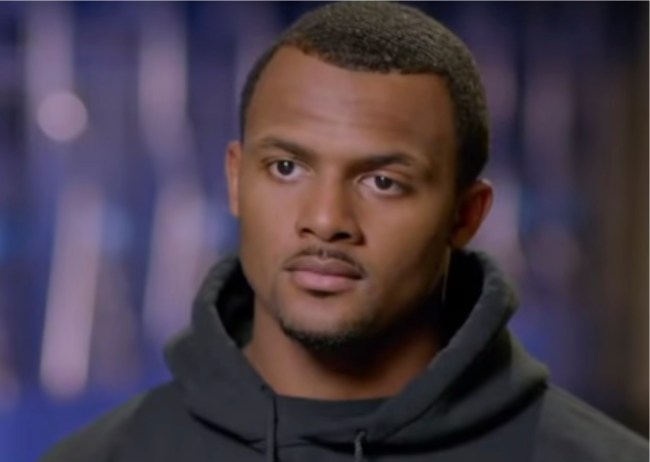 Deshaun Watson and the Houston Texans are preparing to host their AFC South rival, the Indianapolis Colts, this afternoon; Watson’s first ever NFL playoff game. And, while the Super Bowl hope of the Texans may ride on their second-year quarterback who has proven to show up big-time on the grandest of stages — remember those national title games against Alabama while he was at Clemson? — the young star admitted that, at times, the moment can get the best of him.

Talking to ESPN’s Keyshawn Johnson in a segment prior to the NFL playoff game today, Deshaun Watson didn’t mince words about some of the butterflies he gets, openly saying that he “feels a little starstruck” when seeing that he’s playing against some of the biggest stars in the NFL like Tom Brady, Russell Wilson and Andrew Luck. Here’s what Watson had to say, per FTW.USAToday:

Deshaun Watson: “Depending on who we’re playing, it’s just kind of like a little starstruck. You know, because these are guys that… I’m playing against Tom Brady or Russell Wilson, Andrew Luck. Guys like that that I’ve been watching since high school, that’s been doing crazy things. [They’ve] been my role models that I’ve been trying to achieve things they’ve been doing for the longest.

And now I’m on the same field with them, which is pretty cool. So it’s a little butterflies and kind of just getting the feel and the energy of the game, but once the game starts, I’m all focused on my team.”

Keyshawn Johnson: “Is it butterflies the night before the game? Is it during the game, pregame warmups?”

Deshaun Watson: “It’s probably pregame. During the week, the night before the game, I’m chilling. I’m just vibing, just finding my peace, my calmness. But once I step on that field pregame and I can feel the energy of the crowd… the anticipation just before the game starts, that’s when the butterflies come.”

The entire interview is pretty cool, with Deshaun Watson paying respect to Andrew Luck by calling him a “fighter” after the Indianapolis Colts quarterback overcame a near career-threatening shoulder injury. Tale a look at the video below.

You love seeing the mutual respect between two competitors and young stars, but, if you’re a Houston Texans fan, you better hope that any of those butterflies that Deshaun Watson’s referring to disappear early on in the playoff game today against the Colts, because, as we’ve seen, just one mistake could mean the end of a team’s season — even if it’s the first play of the game. Something tells me Watson’s going to be just fine, though, as his history suggests that he can handle any big situation on the football field.