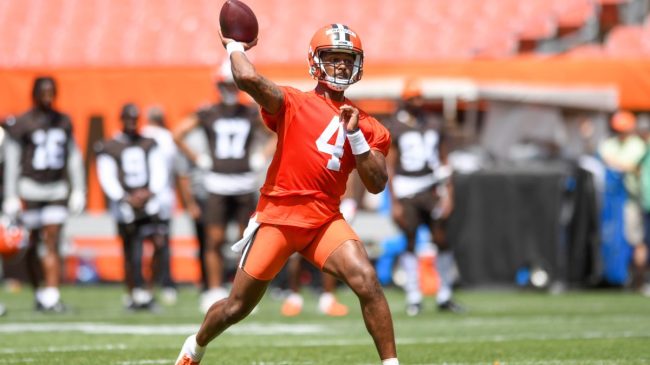 Deshaun Watson walked onto the field to a standing ovation at the Browns’ Monday training camp session. The applause came shortly after the quarterback received a minimal six-game suspension for sexual misconduct.

Browns fans are desperate to see a winner. After going through decades of mediocrity, many see Watson as the answer to their football struggles. The team’s ownership must feel the same way, as they got rid of former No. 1 overall pick Baker Mayfield to make room for Watson just a season removed from a playoff appearance.

Since 1995, the Browns have posted three winning seasons and have won just a single playoff game. Cleveland hasn’t seen a division crown in more than three decades. Again, they are desperate.

But they’re now being blasted for celebrating the fact that their new quarterback will only be suspended six games.

Deshaun Watson’s sexual misconduct has been the headline of the offseason. With news that a six-game suspension would be handed down, fans in Cleveland are celebrating.

It’s safe to say that applause didn’t sit right with the majority of NFL viewers. Take a look at the immediate reaction.

What in the world are you cheering about? In this situation what could you possibly cheer about??? Disgusting. https://t.co/PV9wliZGuZ

Praying for this organizations downfall 🙏🙏🙏 https://t.co/1C52R4ovUw

You can tell when a team never had anything. https://t.co/i8AB2G1m7H

Not the best look for Browns’ fans.

Of course, Cleveland ownership’s statement on the suspension wasn’t much better.

It will be interesting to see how this plays out in the coming days. The NFL still has a chance to appeal the ruling and request more games be added to the punishment.

If they don’t, though, Watson will start under center in Week 7.