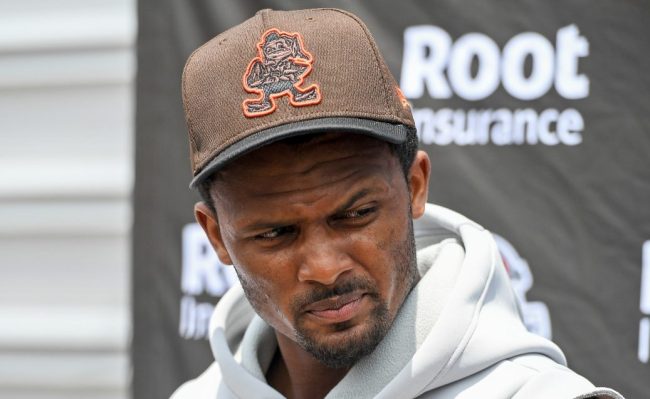 The situation surrounding Deshaun Watson has been an absolute mess. Everything about it has been appalling but it sounds like the NFL is attempting to do the most it can to punish the Cleveland Browns quarterback. Amid the chaos, Roger Goodell finally breaks silence regarding Deshaun Watson’s suspension.

According to James Palmer, the NFL commissioner revealed why the league felt it was necessary to appeal the initial six-game suspension. It’s rather vague, as Goodell isn’t one to open up to the media. However, it’s a quick glimpse into the mind of Roger Goodell. He’s caught a lot of flack over the years, but he and the league have an opportunity to do the right thing.

Roger Goodell on why the league decided to appeal the Deshaun Watson ruling: “that was something that we felt was our right to do, as well as the NFLPA’s”

It seems the NFL is doing everything possible to elongate the suspension for the entire 2022 season. Even so, Deshaun Watson and the NFLPA have claimed they will file a lawsuit if that’s the final decision. At the end of the day, it’s hard to imagine Watson winning that trial considering his past actions.

Watson, of course, has been under scrutiny for allegedly sexually assaulting well over 20 women. It’s been an ongoing investigation, as many are seeking answers and justice for the crimes he committed. Most of the civil cases have been settled but several remain open. After being traded to the Browns, many gave the organization grief for the way they constructed his contract, as Deshaun Watson will avoid any major fines if he’s given a season-long suspension in the 2022 season.

We’ll see how this all plays out. Many speculate the NFL to pull through and issue an indefinite suspension on the Browns quarterback. However, there is still a chance Deshaun Watson sees the field at some point this year.