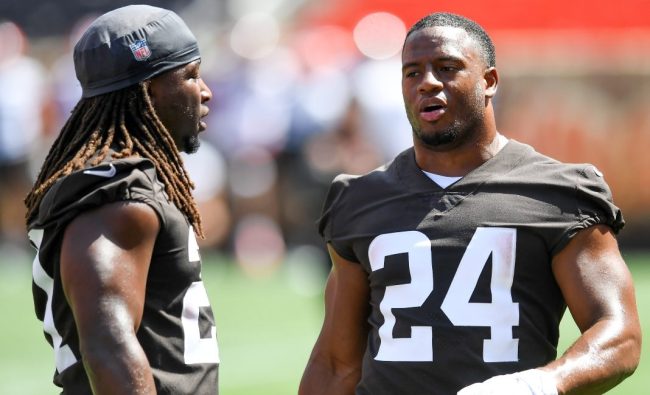 It’s been a rather dramatic offseason for the Cleveland Browns this year but the team is focusing on the upcoming season regardless. Previously, running back Kareem Hunt requested a trade from the organization only for the front office to decline it. Hunt is due to hit free agency next offseason and his teammate Nick Chubb has officially sent a message to Cleveland.

Nick Chubb Does Not Want The Browns To Trade Kareem Hunt

During an interview on the NFL Network, Chubb was asked to weigh in on Hunt’s trade request with the Browns. Smartly, he doesn’t go into details about the situation. However, Nick Chubb very clearly wants Kareem Hunt to stay in Cleveland and thinks the front office should do “whatever they got to do to keep him here.”

“He’s my best friend, on and off the field.”

“I want him to be here, whatever they got to do to keep him here.”@WillieMcGinest @nflnetwork pic.twitter.com/40ozwWzXjy

This is a rather obvious point of view from Nick Chubb. He and Kareem Hunt have been one of, if not, the most dynamic running back duo in the league. The Browns have been dominant on the ground thanks to these two, but the franchise is in a weird place right now with the 2022 season looming.

Last year when Kareem Hunt fell to injury, D’Ernest Johnson stepped up and played the backup role. He proved to be a reliable option when his number was called and since then, many have speculated the Browns to trade Kareem Hunt. Instead, Cleveland seems adamant about keeping Hunt on the roster even though the quarterback situation is completely up in the air right now.

We’ll see how this all plays out. There is a chance the front office changes its mind if Deshaun Watson receives a longer suspension. If that’s the case, then Kareem Hunt becomes available via trade. Some teams to keep an eye on right now as possible suitors are the Houston Texans, Atlanta Falcons, and Arizona Cardinals.