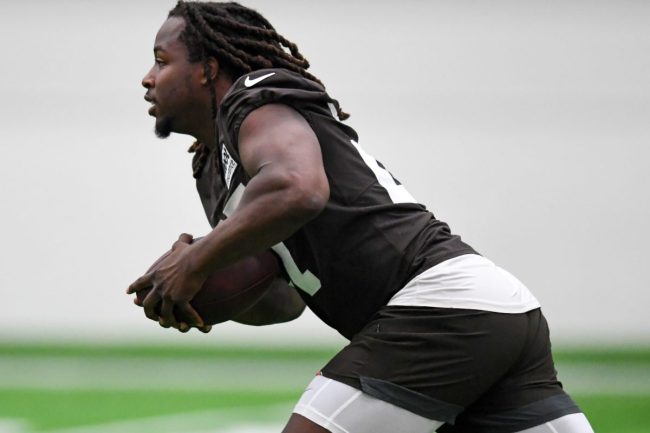 Things are getting interesting in the relationship between the Cleveland Browns and running back Kareem Hunt as the rusher officially asked to be traded from the team.

Hunt was hoping to land an extension this offseason leading to him “holding in” during the Browns’ Fall training camp. It doesn’t appear likely that he’ll get that extension, causing the disgruntled back to request the trade.

According to a report from Browns beat writer Mary Kay Cabot, the team has denied that deal.

“Breaking: Kareem Hunt has asked the Browns to trade him — and they’ve told him no; his best strategy would be to kill it for them this season and earn his next contract”

She would go on to say that he will be fined by the team should he continue holding out at camp, though the coaching staff wouldn’t comment on the trade request.

“Kevin Stefanski won’t say much about Kareem Hunt’s trade demand or holdout of team drills, but acknowledged a healthy player is not permitted to sit out drills. Wouldn’t say if they’re fining him (but they are).”

Hunt 386 yards last year over eight games. He’s typically the first player off the bench behind starter Nick Chubb, though he has landed nine starts over the last three seasons in Cleveland.

Fans around the NFL are reacting to the awkward situation on social media.

Many believe the Browns should give Hunt the deal. He has provided an impact in his reserve role over the last few years.

And, of course, there were a few Deshaun Watson references following the quarterback’s recent suspension.

Lets extended players with suspensions and uncertainty and not give extensions to players who can play all season. So close to being done with this team😂 https://t.co/6UfjOuCcon

The team just can’t avoid the drama this Summer after already dealing with the Baker Mayfield trade and Watson punishment.

The Cleveland Browns might as well have their own reality TV show.

That team has more drama than a Keeping up with the Kardashians episode, my lord https://t.co/E6YZ2WXaSQ

It’s certainly a situation to keep an eye on this offseason.