Surprising Cleveland Browns Player Is ‘Holding In’ At Training Camp 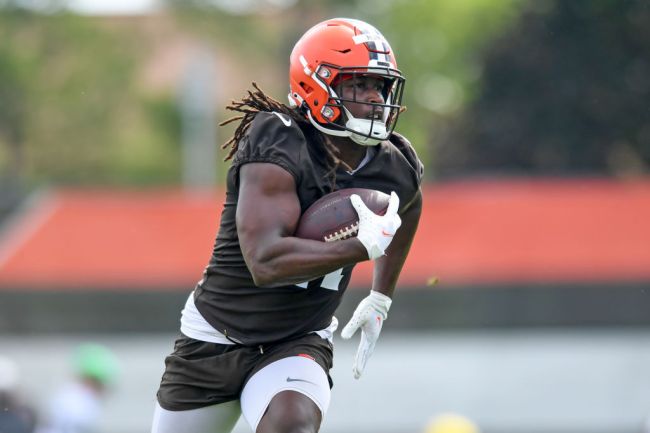 The Cleveland Browns’s offense was expected to head into the 2022 season with some question marks. They knew Deshaun Watson would be facing a suspension and they have a new group of receivers who will be taking over starting roles this season.

Now the Browns have another question mark to deal with.

According to NFL insider Josina Anderson, Browns running back Kareem Hunt is currently “holding in” at training camp.

Browns RB Kareem Hunt—currently seeking a contract extension—did not participate in team drills for the second consecutive practice on Saturday. Hunt told the team multiple times recently, his current plan is to participate in individuals drills only. Friday marked the first 1/4

time since training camp started that Hunt didn't participate in the team portion of practice, per league sources. Their belief is Hunt’s partial ‘hold-in’ isn't health related. Hunt is subject to fines from the club. Hunt’s agent was at the Browns facility earlier this 2/4

week per sources. I’ve been told several times Hunt periodically has said to members of the team informally –he wants to get paid or traded. However, one source emphasized they believe Hunt would like to stay in Cleveland, but just wants to be compensated for his worth. Hunt 3/4

This is a surprising decision from Kareem Hunt as it would be difficult for Hunt to have any less leverage than he does right now. He isn’t the team’s starting running back, the team just spent a ton of money on a contract for a new quarterback, and Nick Chubb’s contract increases over the next two seasons. It’s hard to picture the Browns spending more at running back.

Instead, it likely makes more sense for the Cleveland Browns to send Hunt to a team that needs help at running back before his contract expires at the end of the season, especially if Deshaun Watson ends up facing a longer suspension than the 6 games he has already been suspended for.