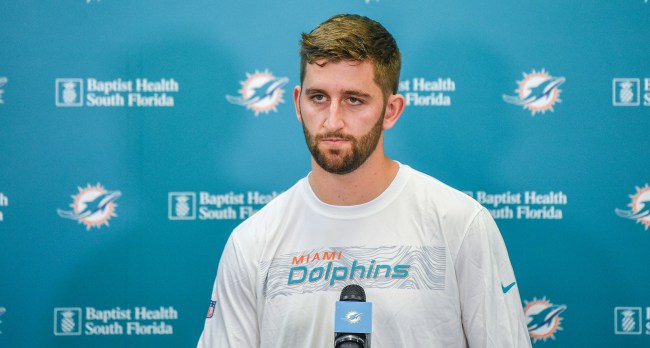 If you thought the Arizona Cardinals’ leaving their 2018 first round draft pick and 10th pick overall, quarterback Josh Rosen, out of their 2019 hype video before the NFL Draft was poorly handled, just wait until you hear how badly the team mishandled his trade to Miami.

Rosen, who struggled to a 66.7 QB rating after throwing for 2,278 yards, 11 touchdowns, and 14 interceptions in 2018, stayed on the high road for the most part throughout the drama surrounding him and eventual number one overall pick Kyler Murray.

He even posted a very congratulatory video to Murray, and thanking the Cardinals, after he was dealt to the Dolphins.

In a show of class, through this entire drama, the usually outspoken Rosen made no mention of how little help he got from Cardinals’ management during his rookie year.

Josh Rosen yesterday on if he'd like to see Steve Wilks return in 2019: "I have thoughts, but it’s not really my place to share it."

This week, a new story by Robert Klemko for Sports Illustrated paints a picture of incredible dysfunction in the Arizona Cardinals’ front office.

The report states that new Cardinals coach Kliff Kingsbury had inexplicably been teaching Rosen the new playbook just days before the team drafted Murray. A pick that made the Cardinals the first team to draft quarterbacks back-to-back in the first round since the Colts in 1982 and 1983.

Then, on draft day, Rosen’s agent, Ryan Williams was contacted by Arizona’s general manager Steve Keim, who asked him if the Patriots might be interested in trading for Rosen.

Williams was taken aback and grew angry. How did Keim not already know the answer? The whole world knew, or had a good idea, that the Cardinals were taking Murray on Thursday. Why the secrecy? Why are we negotiating trade terms now instead of weeks ago? Keim was saying all the right things: “If you want to talk to teams about value let me know,” he texted. “We want to do what’s best for Josh and also what’s best for the organization.” But Keim’s actions spoke louder. He wanted a first-round pick, and might be willing to settle for a second-rounder. A Washington executive, upon hearing that price, chuckled over the phone: “That’s really bold for someone who just took a QB.”

And if that bid failed? Keim told Williams he would keep both quarterbacks on the roster. The GM said the Cardinals had done a study showing that over the past three years, on average, fewer than half the starting QBs in the NFL had played all 16 games. Many teams had to rely on a backup for five or more games. Keim felt the two first-rounders could coexist and give Arizona the deepest QB room in pro football.

So was the Cardinals’ brass being myopic, delusional or just plain stupid during this whole situation?

How Arizona went from bundling draft picks in 2018 and trading up for the 10th overall pick (Rosen) to a last-minute deal for the 62nd overall pick (in exchange for Rosen) is for the moment known only by the people in that Arizona war room.

Unsurprisingly, the Cardinals did not respond to requests by Klemko for comment.