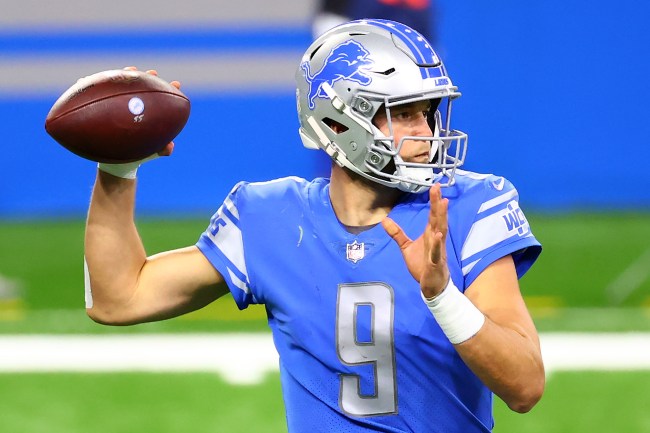 It seems like the Detroit Lions are moving quickly to trade Matthew Stafford.

On Saturday afternoon it was revealed that Stafford and the Lions are parting ways after the team’s longtime QB requested a trade.

Sources: The #Lions and Matthew Stafford have mutually agreed to part ways this offseason and the team will begin exploring trade options in the coming weeks for their star QB.https://t.co/zT00sOGb8Q

After meetings in recent weeks in which Stafford expressed a desire for a fresh start, the Lions understood his position and plan to begin discussing trade options in the coming weeks for their star quarterback, per sources.

The sides have had open and healthy discussions since the season ended. But with the Lions starting over again, hiring Dan Campbell as head coach and Brad Holmes as general manager, Stafford told the team he feels it’s the right time to move on and team officials agreed, per sources.

According to NFL insider Dan Sileo the 49ers are already talking to the Lions about a trade for Stafford.

.@49ers & the @Lions are talking about a deal for #MatthewStafford #OnePride

If the L49ers do end up trading for Stafford, expect Jimmy Garoppolo to get moved as well in a separate trade if the Lions don’t want him.

My writing/table on Matt Stafford's salary-cap numbers if traded from a month ago. He'd come cheaper to 49ers than Garoppolo, which is primary reason this could potentially come into play especially if Stafford wants out of Detroit (now confirmed): https://t.co/xUqEWw6Owb pic.twitter.com/FytI80GKh5

It's possible and maybe even likely that a third team could be involved in a maneuver. Theoretically, New England and Chicago are two teams that might want and have a spot for Garoppolo.

It can get complicated fast, but Shanahan has said that all options might land on the table https://t.co/UJxj6v9enE

No there's value in Garoppolo's contract. 49ers are in unusually tight '21 cap spot. So if they trade for someone like Stafford or even Watson to benefit from lower ‘21 cap hit, they can theoretically recoup capital by finding JG trade partner in a better spot to take on the deal https://t.co/CP99P0oCDm