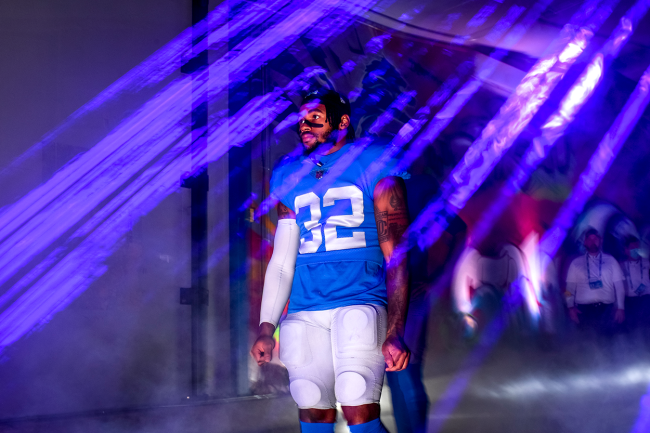 As the Detroit Lions look to turn a new chapter in 2022 and find some success in the second year under head coach Dan Campbell, star running back D’Andre Swift looks huge. He has worked hard to bulk up ahead of the season and now his team is challenging him publicly to play through pain.

Swift, who was a second round pick in the 2022 NFL Draft, has dealt with injuries during his first two seasons in the league. He missed six games with a sprain shoulder and a concussion as a rookie and a significant amount of time 2021 with a myriad of issues.

In turn, he spent much of the offseason trying to get bigger so that he can better absorb contact and stay healthy. It worked, he looks absolutely jacked.

With his added muscle, the team is hoping that he can be on the field more often in 2022. His running backs coach Deuce Staley also revealed that he had a conversation with his third-year ball-carrier about playing through pain.

By doing so, the Detroit Lions essentially called out D’Andre Swift in the public eye, which is definitely strange.

“Injuries happen, but one of the things Swift and I had a conversation about is you’ve got to be able to play through some of these injuries as a running back,” Staley said. “We all know there’s a difference between being injured and hurt. As soon as you step in this building as a running back, Day One training camp, you’re not going to feel the same. There will be some things you have to fight through.”

Now, Staley did acknowledge that a lot of the ability to stay on the field is out of Swift’s control. He also said that he has this conversation with all of his players, not just his star running back. He didn’t single him out, per say.

Either way, to put a player who has struggled with injury on blast over a private conversation had about playing through pain during a press conference is an odd move. Even if he praised Swift’s skills and response to the conversation afterward.