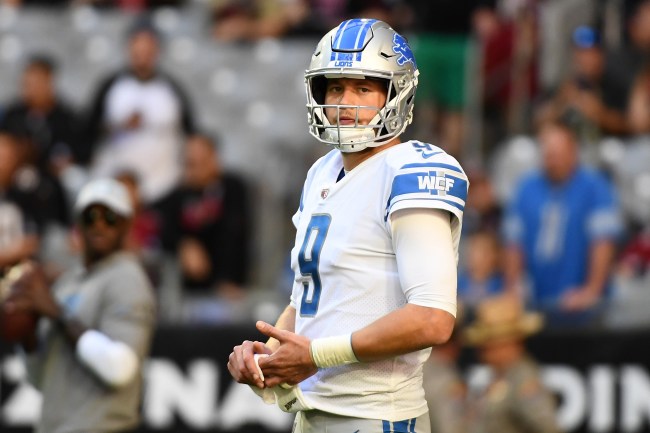 The Detroit Lions sure have taken some L’s on the field this year, as the team’s struggled to find any consistency, and currently sit with a paltry 5-8 record. But the franchise got a slobberknocker off the field today, too, as social media reacted to a tweet the team sent out showing support for quarterback Matthew Stafford, asking fans to vote for him to get to the Pro Bowl.

What might have been a harmless tweet sent by some poor Lions intern, presumably, turned into a full-on blitz on Twitter, as people replied in the most ruthless way imaginable, basically laughing at the Detroit Lions for even suggesting something so silly. Take a look at some of the reactions.

Just trade him and cut your losses. #nomoreMatthewStafford

The fact that someone okay'd this tweet from the social media department… pic.twitter.com/ZwXuJCoEr8

Ouch. Doesn’t seem as if there are too many Matt Stafford fans out there, huh?

Stafford, who is one of the highest-paid players in the NFL with a 2018 base salary of $9.5 million — but who received an absurd $60.5 million in guarantees in his current contract — hasn’t had a great season to say the least. Passing for 3,187 yards for 18 touchdowns and 11 interceptions so far this year might be OK, but for what he’s being paid, fans think the Detroit Lions should have more wins for their investment in the former No. 1 overall pick.

Hey, the Internet never lies, right? Well, OK, sometimes it does, but the Detroit Lions may have found out that the truth hurts — because, at least in this instance, people don’t think too highly of Matt Stafford. Maybe the team will have better luck trying some other player tomorrow to tout for the Pro Bowl?