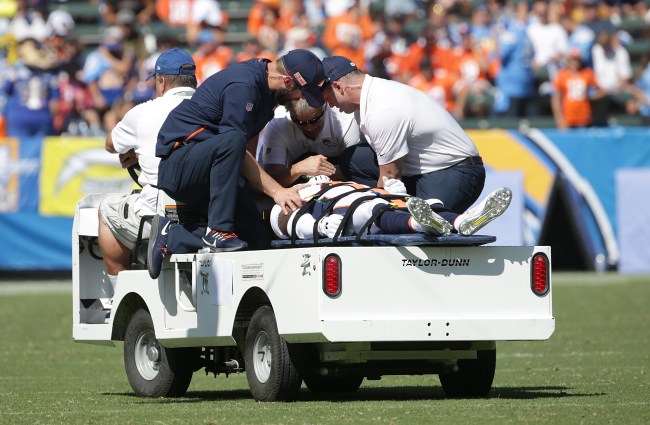 De’Vante Bausby might not be a name many casual football fans know about, but the Denver Broncos‘ defensive back is in the news today after terrifying news about the impact of a collision he had with a teammate during a Week 5 matchup with the Los Angeles Chargers. Just how bad did it get for the fourth-year cornerback? Scary enough that Bausby was paralyzed for 30 minutes before regaining any feeling in his body.

Just to get an idea of how gruesome the collision was, take a look at the video below.

Following the hit, De’Vante Bausby was stabilized and put on a stretcher while being carted off, but, as the video above shows, it was a horrifying moment, with the player laying lifeless on the turf before medics came to his aid. It was one that, had doctors not gotten to him in time, could have left Bausby paralyzed forever.

Talking to ESPN, the cornerback detailed what was going through his mind immediately after the collision, as well as the tense moments when he was at the hospital.

Denver Broncos cornerback De’Vante Bausby, who was taken off the field Sunday on backboard after a collision with a teammate, said Monday he “couldn’t move” for 30 minutes after the hit, but hopes to return to the field as soon as possible.

Asked if he was nervous or afraid after the collision, Bausby said: “Little bit … I was never unconscious, I just couldn’t move, but I was still talking and everything. The doc, the neurologist said I was going to be fine and I just trusted that, and after about 30 minutes I was able to wiggle my toes and after a couple hours I was able to regain full mobility so I was straight, I was fine … They said I was paralyzed for 30 minutes, after 30 minutes I could wiggle my toes and after two hours I could move everything else.”

It’s unimaginable wondering what it’d be like to have zero feeling in your entire body, but Bausby trusted his doctors and hoped for the best. Still, considering he laid motionless on the field immediately afterwards, he’s lucky it wasn’t worse than it ended up being.

With no timetable for a return, Bausby’s just taking things one day at a time as he recovers from the scary incident, hoping to get back on the field sooner rather than later.

“Right now, we’re just going to take it real slow, gain my strength back and all that mess. I don’t have a timetable, but hopefully pretty soon, my plan is to come back and play (this season), though.”

Given the fact De’Vante Bausby laid motionless and was paralyzed for 30 minutes, it’s an amazing comeback story that he’s even thinking about playing football again sometime this season. Kudos to the trainers and doctors for acting swiftly after the collision, and here’s to him having a speedy recovery — because this could have been so much worse.