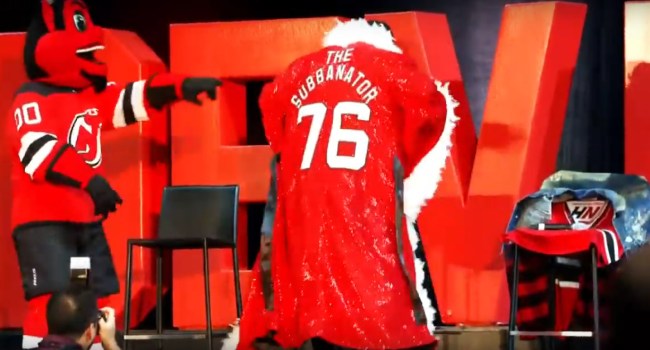 To say the New Jersey Devils are excited to have former Norris Trophy winner P.K. Subban on their roster would appear to be a vast understatement.

Acquired in a trade with the Nashville Predators on the second day of the 2019 NHL Entry Draft, Subban is expected to help revive a team that has failed to make the playoffs in six of the past seven seasons.

On Thursday at the Prudential Center, the Devils introduced their new addition in what can only be described as one of the greatest welcomes ever given to a professional athlete.

There was a red carpet, a drum line, a smoke machine, and a red and white ring robe with #76 stitched on the back presented to “The Subbanator” — a well-known fan of Ric Flair — that the legendary wrestler would certainly be proud to wear.

The team is also excited that Subban will be bringing his girlfriend Lindsey Vonn along with him to New Jersey.

“Let’s face it. P.K., and we’re lucky enough to adopt Lindsey also, they’re major stars. I think that it’s welcome here in New Jersey, it’s welcome in our culture, and I think it elevates our organization,” said managing partner Josh Harris about Subban’s acquisition. “I’m very excited about it. I think it’s a win-win on all sides, and we’re lucky enough to have someone who’s very good at it, embraces it and connects with fans. We’re trying, as much as we can, roll that out in an effective way.”

Check out the rest of the incredible spectacle below…