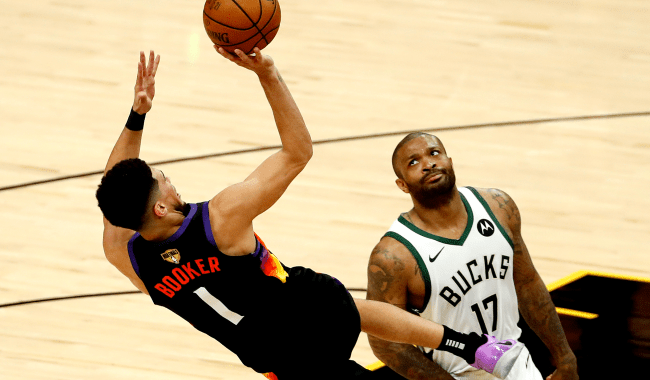 Devin Booker and the Phoenix Suns made it look easy Tuesday night, winning Game 1 of the 2021 NBA Finals 118 to 105. The game was never really in doubt as the Suns led by 16 points after three quarters.

Booker had his usual night of excellence, scoring 26 points to go along with 6 assists. Chris Paul, in the first NBA Finals of his career, also went off for 32 plus 9 assists, while Deandre Ayton added 22 points and grabbed 19 rebounds in the decisive victory.

“His effect is that big, you know what I’m saying?” Booker said about Paul after the game. “So he moves this team, he leads this team daily. Just having him in the locker room, I’m not even talking about anything he does on the court, he takes the team to that next level.”

Numerous NBA fans watching the game made note of the fact that Devin Booker appeared to be following in his teammate Chris Paul’s steps when he hit the sidelines for some rehydration, drinking from a specially marked bottle with “BOOK” written in large capital letters written on the side.

Devin Booker to CP3 and rest of the Suns vs the Bucks rn like:#NBAFinals #RallyTheValley #FearTheDeer #NBA pic.twitter.com/o0Y7CR0xR9

inside is a smaller water bottle labeled ‘comic book’ pic.twitter.com/agNbUZSgdm

Me the night before every test in college pic.twitter.com/x8IwXMJuic

Clearly these special drink bottles are now officially a thing with the Phoeniox Suns.

Between Booker’s special bottle and all of the amazing vintage cars he’s been rolling up to playoff games in, the man is having himself quite a good run.

all the whips devin booker has pulled up in during the postseason (updated) pic.twitter.com/L0jgVw86yS

The exact moment Devin Booker realized he is making the NBA Finals and has Kendall Jenner waiting for him at home. pic.twitter.com/reGz5HtdfI