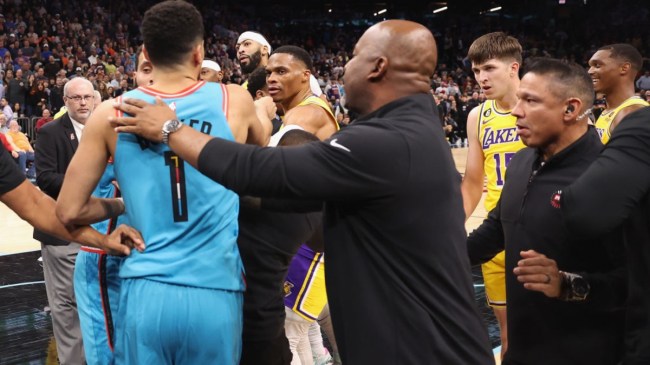 Down the stretch of last night’s game between the Phoenix Suns and Los Angeles Lakers got ugly. With just under 4 minutes remaining in the game, the Suns were up by 10 and seemed to be coasting to a win.

Then Devin Booker blocked an Austin Reaves shot and the tone of the game shifted. Booker ended up being whistled for a foul on the block, but that didn’t stop Deandre Ayton from standing over Reaves.

In response, Patrick Beverly came in and shoved Ayton in the back.

Patrick Beverly was not okay with Ayton standing over Reeves…😳 pic.twitter.com/Ua913J0e2K

Devin Booker took issue with shove after the game. In a post-game interview, Booker said Beverly needs to stop pushing people in the back and start pushing them in the chest.

"Pat need to stop pushing people in the back man. Push them in the chest."

Devin Booker had a strong message for Patrick Beverley after the Suns Victory 😤pic.twitter.com/U29Sqs22TX

This isn’t the first time Beverly has shoved a Suns player in the back. Beverly also on e shoved Chris Paul from behind as Paul was walking in the other direction.

Chris Paul knows all about that.pic.twitter.com/ktkiqGgYxm

Booker’s suggestion would certainly make these moments from Beverly seem less dirty. As much as the Lakers want to praise Beverly for defending his teammate, the reality is that it was a dirty move.

In the end, the Suns got the last laugh as they were able to hold on for the 10-point win.

The Phoenix Suns will now return to competing for the top spot in the West while the Los Angeles Lakers go back to struggling to even compete for a playoff spot.