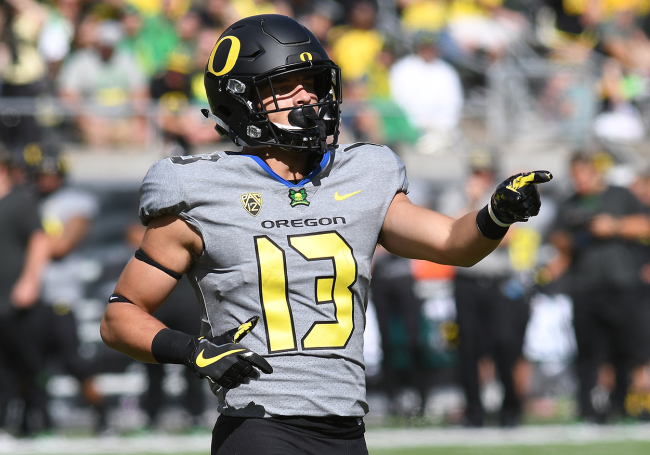 By all accounts, Jalen Hurts is an awesome guy. Despite being the starting quarterback of Alabama, Oklahoma, and the Philadelphia Eagles, he has long been considered “one of the good ones,” if you will.

Hurts is consistently talked about in a high regard by Nick Saban, Lincoln Riley and many of his teammates. His new rookie pass-catcher is no exception.

Devon Allen, who played football at Oregon from 2014 to 2016, did not choose to pursue a career in the NFL out of college. He went on to run track professionally and has been remarkably successful, including this past weekend when he casually ran the third-fastest 110-meter hurdle in history.

However, after almost seven years away from the game, Allen is returning to the football field. He signed with the Eagles as an undrafted free agent in April and will hope to make the 40-man roster.

During a recent interview with NBC Sports Philadelphia, Allen spoke about his short time with the team. In doing so, he had some high praise for Jalen Hurts that spoke loudly about the quarterback’s character.

Allen said that Hurts had him over on the day prior to a race for a crawfish boil. He also said that his new quarterback didn’t owe him anything but went out of his way to make an effort to get to know him.

“This guy doesn’t owe me anything. I’m the 6th,7th,8th receiver on the depth chart & he made an effort to get to know me”

Hurts enters his third year with the Eagles this fall and his second year as the starter. He looks much bigger than last season as he enters training camp and hopes to find even more success in 2022. Perhaps Allen will be a part of that success?