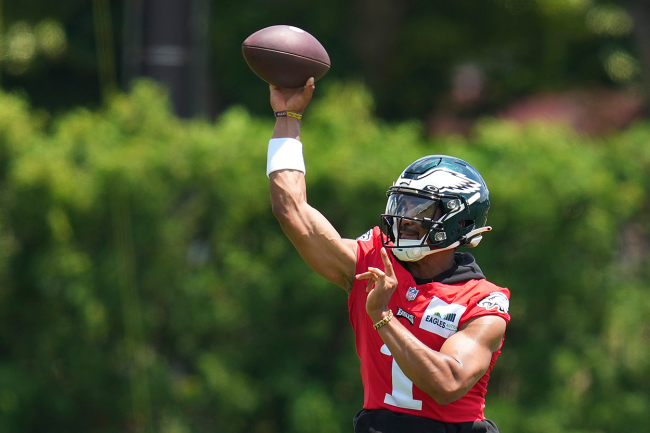 Small, skinny and scrawny are not words that can be used to describe Philadelphia Eagles quarterback Jalen Hurts. The 23-year-old is none of those things, especially after he showed up to training camp looking absolutely jacked.

In college, Hurts max squatted 600 pounds, which is downright insane.

To make things even crazier, he did so for the first time at 16 years old. Hurts and his relationship with the weight room has long been established and he has always been much stronger than he might look.

Jalen Hurts says one reason he powerlifted is because he wanted to be different. Now he’s an Eagle, and he is different 🔥 #NFLDraft pic.twitter.com/wKbngtrfng

However, his lower body was always noticeably more strong than his upper body. And that isn’t to say that he had a week upper body. It just lacked in comparison.

Not anymore! Impressive before/after photos of Hurts at this time last year and last week show a significant amount of muscle gained— particularly in his arms.

In Hurts’ first year as the full-time starter, he threw for 2,144 yards and 16 touchdowns in 15 games. Perhaps his new-found arm strength will help him boost those numbers.

Additionally, Hurts ran for 2784 yards and ten touchdowns. He was already tough to bring down, but this added upper body strength only makes him more difficult to tackle. He’s looking jacked!