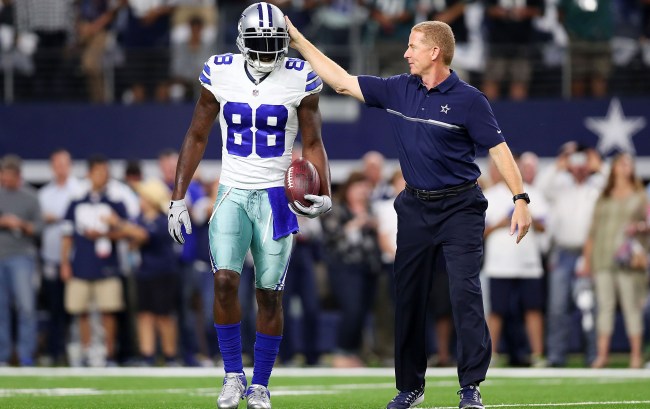 Did you know that Dez Bryant is only 31-years-old? For comparison, Atlanta Falcons All-Universe wide receiver Julio Jones is 30-years-old and San Fransisco 49ers wideout Emmanuel Sanders is 32-years-old. There’s Julian Edelman, who is 33, and there’s AJ Green, who is also 31. Plus, we can’t forget about Larry Fitzgerald, who is now 36-years-old!

So, what’s my point? My point is that Dez Bryant — who was as dominant as any of these guys during the peak of his career (from 2012-2014, Bryant had 273 catches for 3935 yards and 41 touchdowns)– should easily still be playing in the National Football League at 31-years-old.

And yet, he hasn’t been in the league since — checks notes — 2017! Basically three years ago! How? Why? Is he too old? Too slow? Or too annoying?

Regardless of the reason, these are the facts: the best seasons of Bryant’s seven-year-long career came under Jason Garrett, and considering the fact that he’s been essentially jobless ever since, you would think he’d put a little more respect on the man’s name.

Bryant obviously isn’t as grateful to Garrett as he should be, though, as he immediately took to Twitter in the wake of his firing to share his remarkably eloquent opinion about the Cowboys’ change at the head coaching position.

While the sentiment of what Bryant is saying may ultimately be true, the fact that he has “no sympathy” for the guy who was in charge during the peak of his career is just bizarre, especially when considering that, by all accounts, Garrett is supposedly a great dude. Stay classy, Dez.

We can debate ad nauseam the merits of Jason Garrett’s coaching tenure with the Cowboys. Here is what I know- after working 14–16 hour days, he showed up late at night, unannounced, for the last 3 days of Luke’s life. That is what I know. pic.twitter.com/HeZMs0tK6j

But Garrett wasn’t going to miss the opportunity to pay tribute to Luke.

And boy did he…