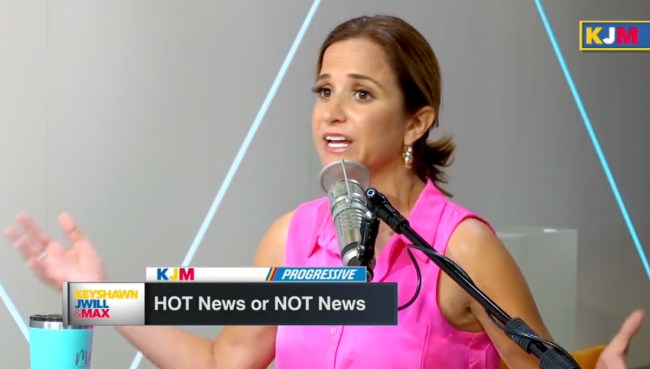 Diana Russini, an NFL reporter for ESPN, isn’t happy that she has to talk about Aaron Rodgers, one of the best quarterbacks in the NFL.

Russini voiced her frustration about simply talking about the Green Bay quarterback following a comment he made about possibly retiring at ‘The Match’ on Wednesday.

“Tommy [Tom Brady] set the bar so high with playing for so many years, but I can definitely see the end coming,” Rodgers said.

Arguably the best QB in the NFL hinting at retiring much sooner rather than later is going to create headlines and immediately become one of the biggest storylines of the NFL offseason.

Russini isn’t thrilled about those facts, however.

“Congratulations, Aaron Rodgers. You now get the headlines again,” Russini said. “Because guess what we’re talking about to start off this football segment? Aaron Rodgers, again.”

“We did this all last year…Now we’re going to have conversations about him retiring?”

“Congratulations, Aaron Rodgers. You now get the headlines again.”@diannaESPN & @keyshawn react to Rodgers saying he can see the end of his career coming. #KJM pic.twitter.com/oDh1L0dlxS

Russini’s speel wasn’t all just Rodgers slander, she did refer to him as “one of the greatest quarterbacks to ever play the game.” That doesn’t take away from the fact that her complaining about having to talk about Rodgers comes across as both odd and negative, however.

At the end of the day, Rodgers was asked a question and he answered it. In his answer, he hinted about retiring which means sports talk radio shows around the country will be talking about Rodgers, but Russini doesn’t want that to be a reality.

The one, and obvious, defense for Russini here is that she has to talk about the same headlines multiple times a day. Her showing some frustration about that is only human.