Diego Maradona Went Through Every Emotion During The Argentina-Nigeria Game 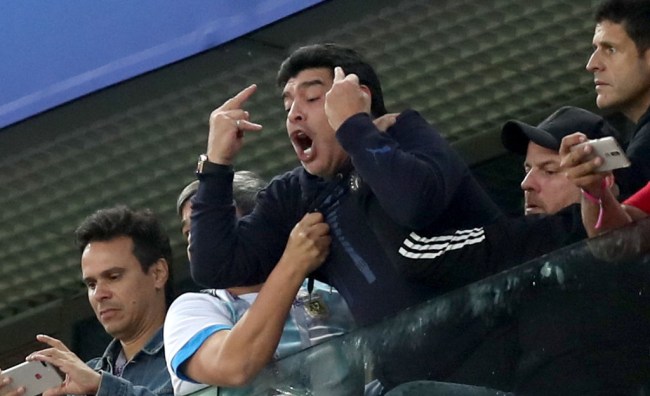 Argentinian soccer legend Diego Maradona is an emotional guy. After Argentia’s 3-0 loss to Croatia, Maradona was absolutely furious with his team and wanted them

“It cost us too much to be where we are for Croatia to hit us for three goals and to leave with our arms crossed without putting a foot in,” Maradona told Venezuelan TV channel Telesur.
“We’re going to defend our honour.”I’m furious and very upset inside, because anyone who has worn that shirt can’t see it being trampled like that by a Croatian team that isn’t Germany, that isn’t Brazil, that isn’t Holland or Spain.”

Today, Argentina was able to advance to the round of 16 after an epic win against Nigeria. Maradona was in the stands for the game and experienced every single emotion.

Maradona when Nigeria tied the game.

After Argentina retook the lead late in the second half.

And here’s Maradona crying after the game.

Di Maria on the field crying. Maradona in the stands crying. Argentina really out here trying to corner the market of feelings. pic.twitter.com/IazPZw5AuI

It must be exhausting being Diego Maradona, my goodness.