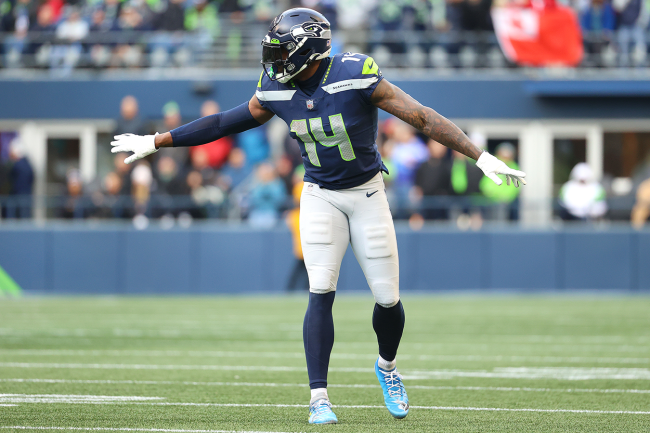 Seattle Seahawks wide receiver D.K. Metcalf is a very large human being. He is one of the biggest players at his position and amongst the strongest in the league.

And yet, his size and stature is insignificant compared to that of Dikembe Mutumbo.

Despite the fact that Metcalf is an abnormally massive person with freak athleticism, he is dwarfed by NBA legend Dikembe Mutumbo.

Mutumbo, a first-ballot Hall of Famer, is 7-foot-2, 260 pounds. Although his hand size is not listed, they must be amongst the biggest in the world.

Mutumbo and Metcalf recently took a photo together and it really puts things in perspective. Mutumbo somehow makes Metcalf look small — and not just a little bit smaller than he is, but actually small.

It is unclear as to where the photo was taken. It could have been on uneven ground, for all we know.

However, taking the picture of two tremendous athletes in their respective sports at face value, it looks like three of Metcalf’s hand would make up one Mutumbo hand. Goodness.