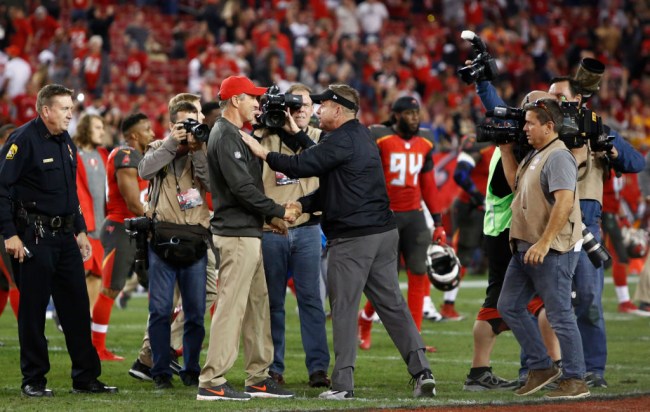 After the Bucs beat the Saints on Sunday, coaches Dirk Koetter and Sean Payton had a very intense postgame handshake that involved some very hard chest slapping.

The two coaches appear to be still beefing over an incident that occurred back in week 9 when Saints cornerback Marshon Lattimore got hit got with a cheap shot by Bucs wide receiver Mike Evans which led to a one game suspension for Evans.

As Koetter tried to say something, Payton explained why he was upset.

“Here’s the thing: I got pissed in the last game,” Payton said.

“I couldn’t see it,” Koetter replied, apparently indicating he didn’t see the hit his player delivered on Payton’s player.

Koetter then began trying to explain himself by saying, “Sean, if I had seen it–” but Payton walked away before Koetter could finish.

FOX 13 in Tampa has video of the exchange, and it appears that these two coaches don’t like each other very much. So everyone will be sure to keep an eye out when they meet twice more in 2018.

The Bucs and the Saints meet each other twice next season and it’ll be fun to see if the bad blood between the two coaches will carry over next year.