These Are The Dirtiest, Most Expensive Stadiums In The NFL, According To New Research 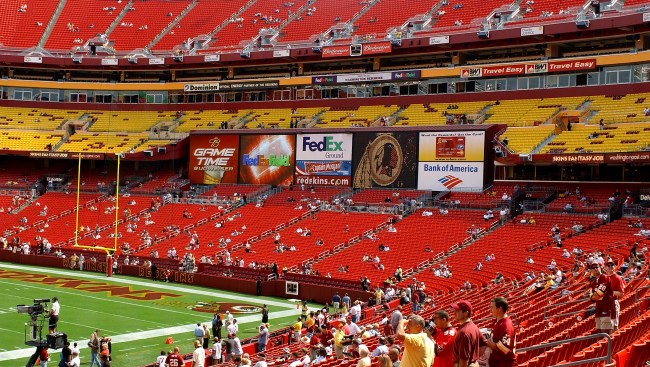 As every sports fan knows, some stadiums are better than others. Depending on who you root for or where you live, your live sports experience may differ greatly from someone else down the road.

Those facts are no more evident than when you compare NFL stadiums against one another in categories like the fanbase, prices, traffic, and cleanlinness.

Of course, not many of us even have to privilege of attending NFL games in person (not even some players’ families) so those issues haven’t been at the foreftont of the NFL fan experience in 2020.

Still, thousands upon thousands of us have attended NFL games in the not-so-distant past.

The question being asked today, and hopefully satisfactorily answered, is, which NFL stadiums provide the best fan experience overall?

To figure this out, the folks over at advice site GamblersPick.com conducted a little study by reviewing almost 10,000 recent Yelp reviews of each NFL stadium.

The worst three stadiums overall were…

The top three stadiums overall were… 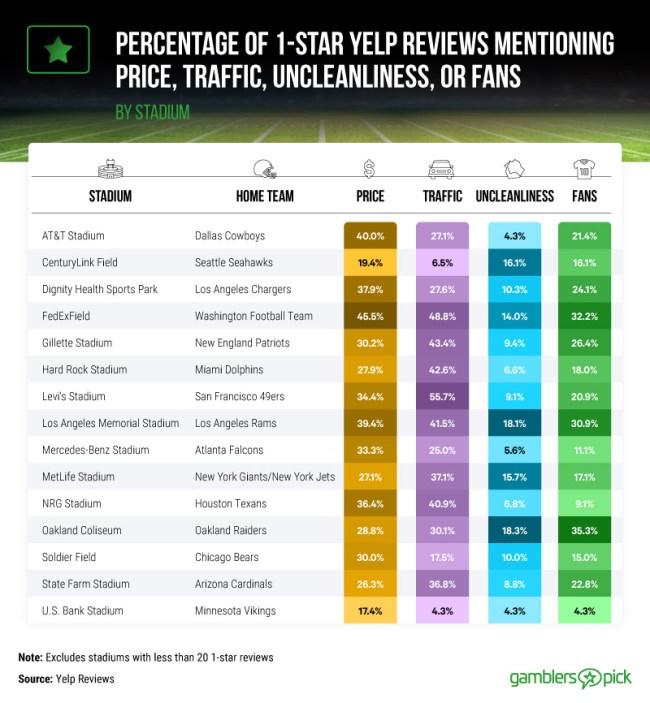 Ultimately, price and traffic seemed to be the top two factors that weighed into most 1-star reviews. Things like uncleanliness and fans were mentioned, but not nearly as often in the bad reviews. Fans of the Raiders, however, were one exception to this rule and were mentioned more than a third of the time in all negative reviews about their stadium 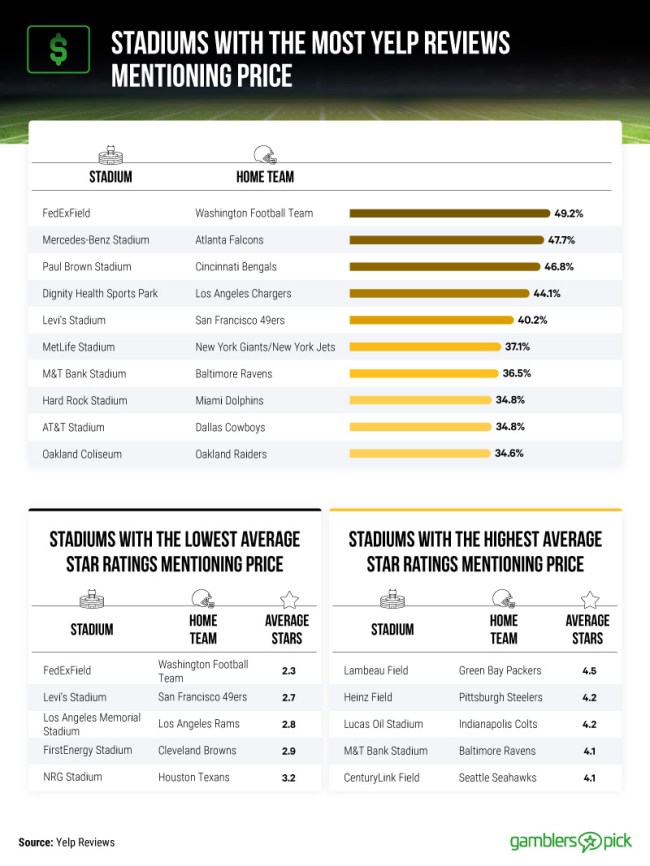 Next, they moved on to price, and once again, FedExField came in at the bottom. 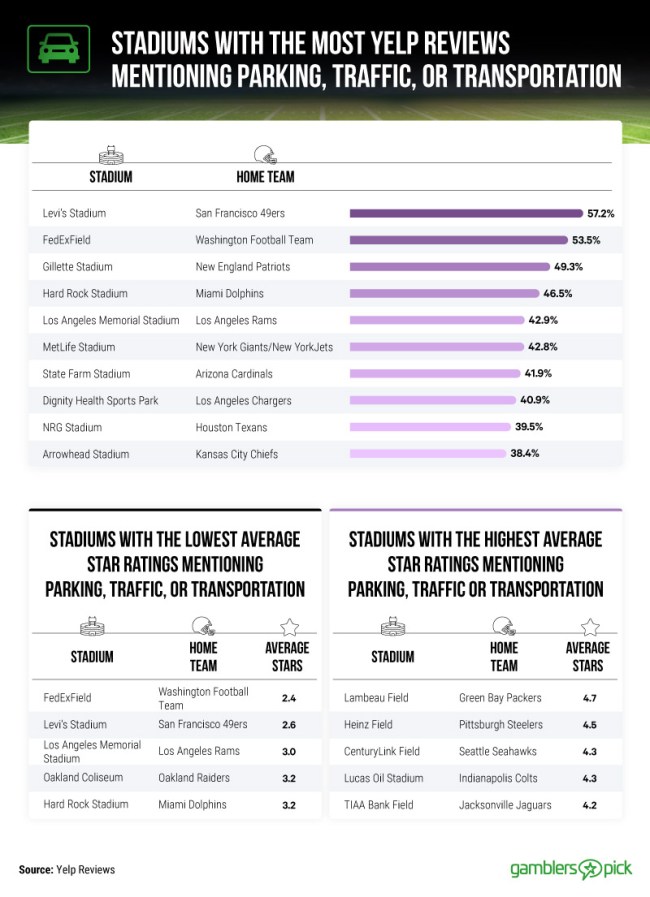 On the positive side of price, the Green Bay Packers ranked first for star ratings at Lambeau Stadium when it comes to price.

Now we move on to parking, traffic, and transportation. Guess which stadium was near the very bottom again?

More than half of all 1-star reviews of FedExField mentioned parking or traffic, and the reviews about it were lower than any other stadium.

Stop me if you’ve heard this before. FedExField came in near the bottom.

FedExField had a higher percentage of its reviews mentioning uncleanliness (13.5%) than any other stadium. However, it wasn’t dead last! The Chargers and Rams’ stadiums were rated below the Wasington Football Team’s home.

Just one problem: both those teams have since moved into a new $1 billion stadium, while Washington is still at FedExField. 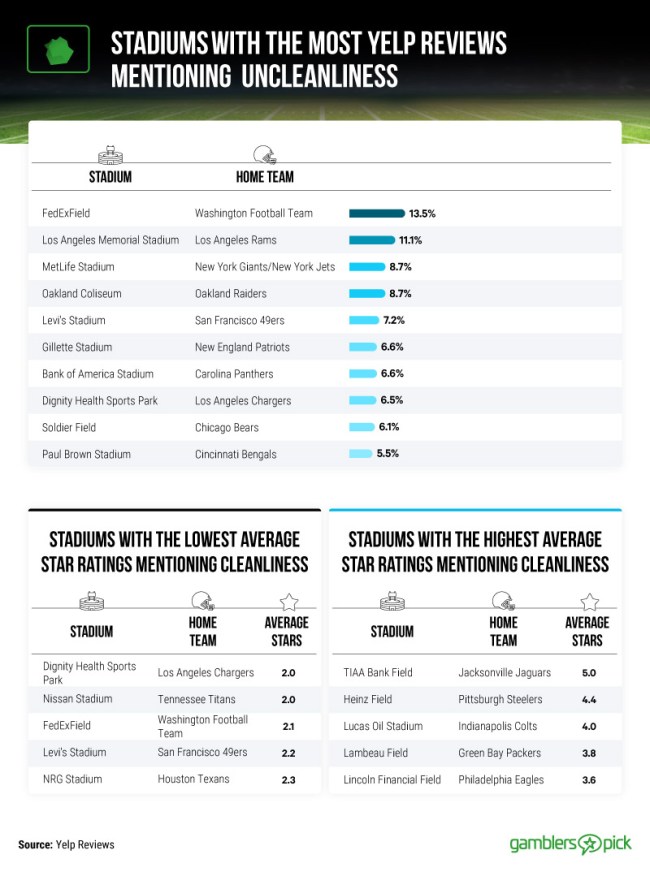 Hey, at least the Tennessee Titans’ Nissan Stadium had a lower average star rating for cleanliness than FedExField did. Progress!

And finally, the fans.

When it comes to fans it was just more of the same with FedExField being the worst fan-related stadium and Lambeau Field being ranked the best. 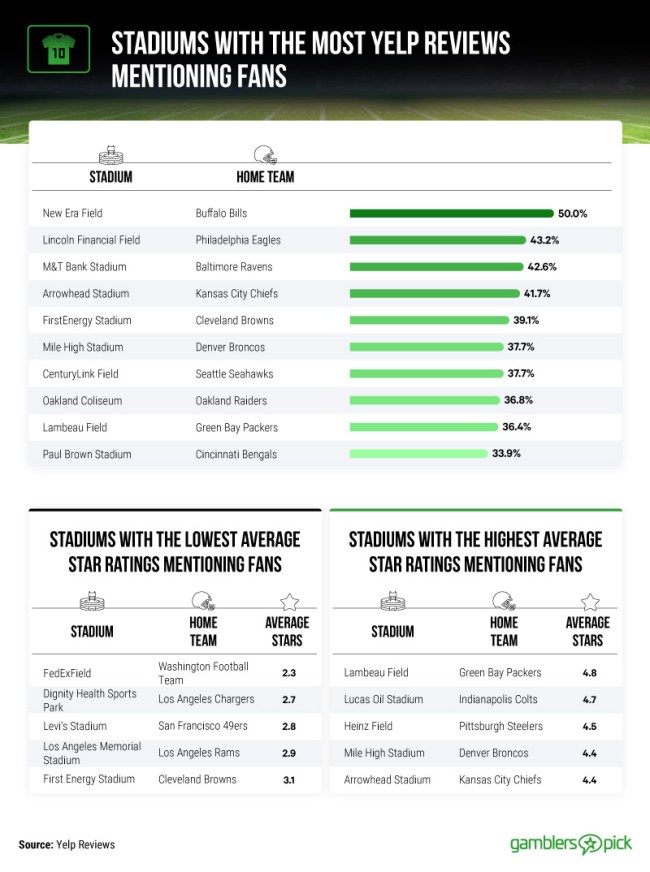