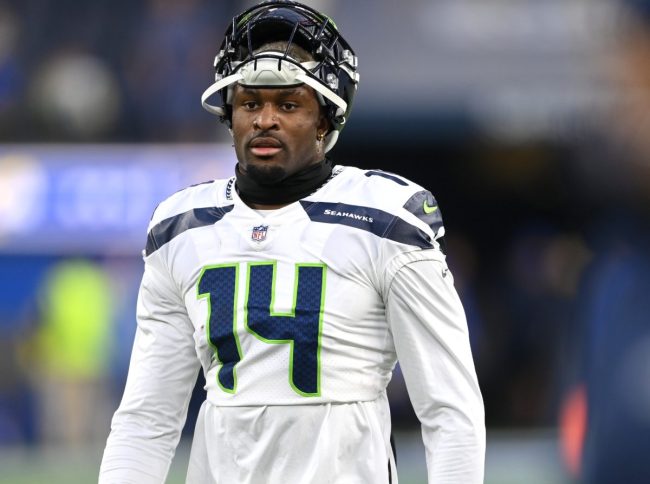 DK Metcalf just signed a record setting contract extension to remain with the Seattle Seahawks. NFL insider Adam Schefter first reported the news on Twitter, laying out the details of the agreement.

Seahawks’ WR DK Metcalf is signing a three-year, $72 million extension that includes $58.2 million guaranteed, per source. Deal includes $30 million signing bonus, the highest ever for a WR. Metcalf will be a free agent again at 27 years old.

Schefter notes that the deal comes with a $30 million signing bonus, the highest for a WR in the history of the NFL. It solidifies Metcalf’s standing in Seattle after a turbulent offseason.

The wide receiver was consistently mentioned as a trade target this summer, reportedly unhappy with the status of his contract negotiations. Things then carried over into training camp as he was with the team, but not practicing.

Seattle finally got the terms worked out, though, and when all was said and done the pass catcher became one of the more highly paid receivers in the league.

But while NFL fans are certainly happy to see Metcalf land the deal, there’s one thing that’s tempering their excitement.

After seeing DK Metcalf’s contract extension, fans tried to be happy. Then they remembered he still has to catch passes from Drew Lock and Geno Smith.

Metcalf shined with Russell Wilson, racking up over 3,100 yards in his first three NFL seasons. But that production could take a hit now that Wilson has moved on to the Broncos.

Fans certainly think so. Take a look at the immediate reaction below.

smart to get that heavy guaranteed $ on a short deal when Drew Lock is throwing you open https://t.co/53VnMDYlaf

DK getting the bag but realizing he has to catch passes from Drew Lock and Geno Smith https://t.co/bJGDBwPGl6 pic.twitter.com/1OWnILQ1Kj

DK getting the bag but realizing he has to catch passes from Drew Lock and Geno Smith pic.twitter.com/o5EakD6x97

Metcalf with Geno Smith and Drew Lock as QB pic.twitter.com/uItkCuTrro

DK Metcalf pulling up to practice after Drew Lock overthrows him in the red zone: pic.twitter.com/O3HWQRSs8k

DK Metcalf the 2nd year of his contract when Drew Lock is still his QB pic.twitter.com/9GEM31lNKD

It will be interesting to see how it works out for Metcalf and the Seahawks next year.