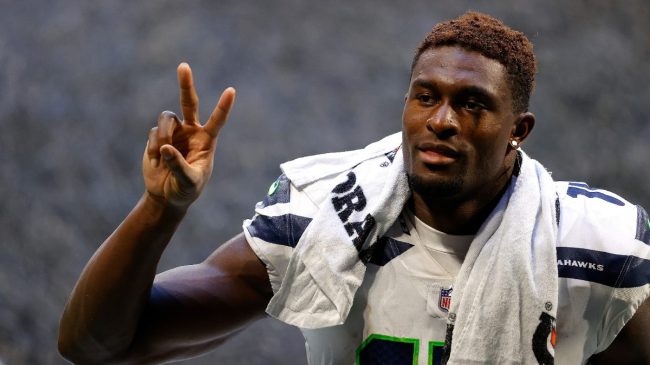 DK Metcalf is one of the most imposing wideouts in the NFL.

At 6-foot-4 and 230 pounds, he towers over most defensive backs. He also possesses top notch speed, being clocked at more than 22 MPH in game action.

So, it’s not a surprise that the pass catcher is a hot commodity on the NFL market.

In three seasons with the Seahawks, Metcalf has racked up more than 200 receptions for 3,170 yards and 29 scores. His name has been mentioned in trade talks over the last few weeks as NFL teams look to add talent at receiver.

Seattle could be willing to unload a few players this offseason. They’ve already dealt QB Russell Wilson to the Broncos. With the offense’s best player now gone, the organization could look to start a rebuild.

And the Seahawks definitely have interested suitors for their star wideout.

The Cowboys, Jets, and Eagles are on the hunt for receiving talent as they look to bolster their rosters. Metcalf could provide a perfect addition to the repertoire.

While rumors continue to swirl, there’s one person that hasn’t been asked his opinion on these offseason talks.

On Monday, the wide receiver provided his response to the trade talks via social media.

Metcalf took to Twitter on Monday to give his take on the trade talks.

Haven’t heard anything, per @dkm14 https://t.co/S5CBHrDCjP

The pass catcher apparently hasn’t heard much from the organization about the possibility of being dealt. He gives the hilarious response, “Haven’t heard anything,” before tagging himself as the reputable source.

As far as Metcalf is concerned, he plans to be back in Seattle for the upcoming season. We’ll see if that changes over the summer.