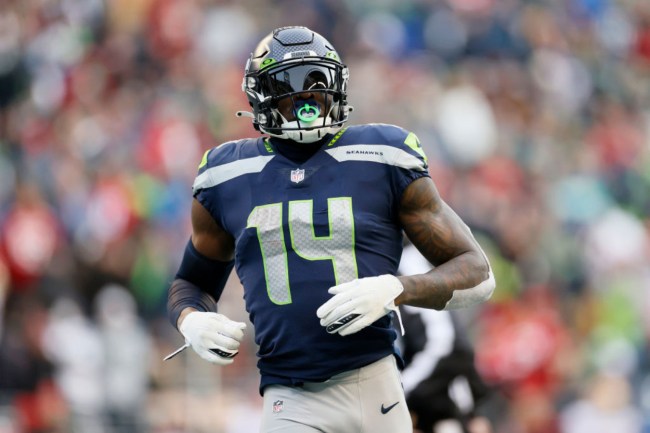 DK Metcalf has been in the middle of the trade rumor mill after ESPN’s Jeremy Fowler reported the wide receiver could be dealt for “the right price.”

Based on a new report, the 10th overall pick in the 2022 NFL Draft isn’t the right price.

According to 94WIP’s Howard Eskin, the New York Jets were set to offer up the 10th overall pick to the Seahawks in exchange for Metcalf, but Seattle wasn’t having it.

“The Jets were going to offer, and Seattle knew it, the No. 10 pick in the first round,” Eskin explained. “I’ve been told by multiple people when somebody calls Seattle about D.K. Metcalf (they said) ‘We’re not trading him. We’re not trading him.’ They don’t even take the offer.”

“They just say ‘Nope’ and they just shut it right down. You can’t even make an offer right now.”

The Seahawks could be looking at a rebuild this season after trading Russell Wilson to Denver. Getting the No. 10 pick would help their efforts, but they clearly don’t want to start this new era in Seattle without Metcalf in the fold.

Last season, his third in the league, Metcalf had 967 receiving yards and a career-high 12 touchdowns.

Why the Jets want that man to suffer 😂 https://t.co/yHamlsf2zn

If this is true the Seahawks are dumb https://t.co/hTpXleHjs1

They should’ve did it since they’re rebuilding, they don’t got nobody to throw the ball to DK right now anyways https://t.co/Vq5ZXH2D20

Translation: DK has no interest in playing for the Jets. https://t.co/1deTDxdzWv