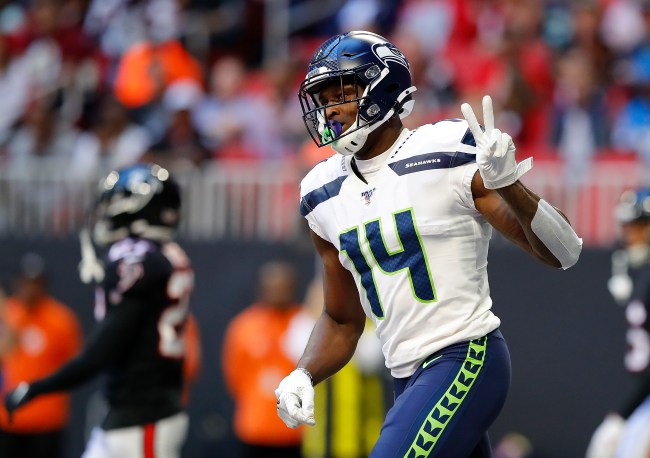 Seattle Seahawks wide receiver D.K. Metcalf has been sensational this year. The 6-foot-4, 230-pound freak athlete broke the internet with his chase down of Cardinals cornerback Budda Baker in Week 7 and followed it up with a 12 catch, 161-yard and two touchdown performance against the 49ers on Sunday. He is on pace for 1,554 yards and 16 touchdowns if he can replicate his blistering pace in the second half of the season and simply cannot be stopped in any facet of the game. He is big, fast and every secondary’s worst nightmare.

His unbelievable athleticism got 710 ESPN Seattle radio hosts Tom Wassell, Stacy Rost and Jake Heaps wondering what other sports that Metcalf could dominate. Heaps works with Russell Wilson in the offseason and has hooped with Metcalf as a result. He made a quip on-air about the receiver’s ability to translate his football prowess to the basketball court, calling out his shooting ability.

.@tomwassell: I wonder if @dkm14 is good at every sport

me: I bet he's even good at croquet@jtheaps9: Doubtful. I've seen him shoot.

Jake being extra disrespectful this morning.

Metcalf caught wind of the conversation and decided to give Heaps a ring. The FaceTime call went unanswered and he put the ESPN radio personality on blast.

Heaps called Metcalf on his tweet and did what all good media folk would do and asked him to call into the show, half expecting him not to answer.

I told DK to call the @710ESPNSeattle phone line so we can settle this and crickets… @dkm14 I never thought you were just twitter tough 😂 (immediately regret sending tweet) https://t.co/qIgICbKJX5

Little did he expect, Metcalf walked the walk and called into the show. He challenged Heaps to lace up his sneakers for a 1-on-1 matchup that would settle the debate. The date hasn’t been set, but we’ve seen what happens when Metcalf is challenged, and it never ends well for the challenger.