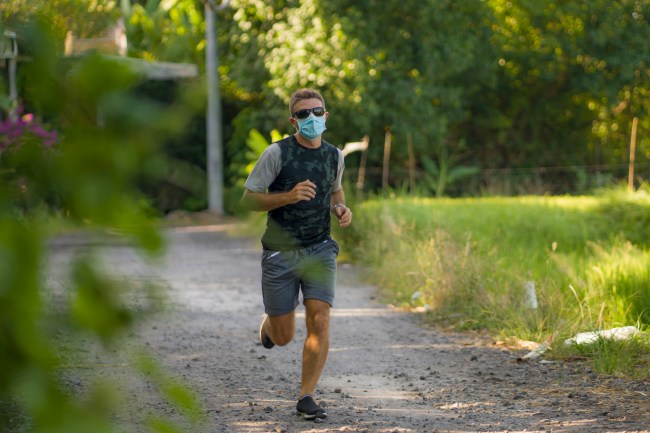 After generations of Hollywood pumping out dystopian plague films, one thing the filmmakers never touched on was how large chunk of the global population would straight-up refuse to believe what was happening and furthermore some of them would refuse to listen to guidance from the experts. Wearing a mask in public prevents the spread of the virus and until we have a vaccine it’s really the best measure we have outside of complete isolation which obviously isn’t feasible.

During the 22-miles, his oxygen levels never dropped below 98%…while running 85% of a marathon IN A MASK. Here’s how it all went down, according to Newsweek:

“There are a lot of people out there who just don’t want to wear a mask and will find any excuse they can but the people I’m more concerned about are people with respiratory illnesses, who would like to wear a mask, would like to do their bit, but are scared because there have been reports that it causes hypoxia [a condition where the body is deprived of oxygen], I’ve seen some reports about people dropping dead while wearing masks.

“I’m someone who understands the science, I’ve got access to a pulse-oximeter (a device used to monitor the amount of oxygen carried around the body) so I can actually go out and show that it definitely doesn’t.

“To make up for the fact that I’m fit and healthy, I thought if I’m running then I’m using 10 times the amount of oxygen as I would if I’m just sat here. If I can show that I can get 10 peoples worth of oxygen through the mask then hopefully someone who has a respiratory disease and wants to wear a mask, they can be reassured that it is safe thing to do.” (via)

If you don't want to watch the video:https://t.co/AgA2j1Fquu

‘I've seen some of the worst of what this virus can do.’ Tired of seeing misinformation about face masks and wanting to reassure his patients, @BTHFT ICU Doctor Tom shares why he embarked on a 22-mile run — wearing a face mask the entire time. 😷 🏃 https://t.co/lBGojbav8R

He raised £3,371 of his £500 goal for The Trussell Trust who operates food banks around England. On the Gofundme page, he has videos of him running the 22+ miles while wearing a mask and proof that his oxygen levels never dropped below 98% despite running 85% of a marathon while wearing a face covering. If he can run that far while wearing a mask then surely every single one of us can be responsible enough to wear a mask inside of the grocery store or while walking around crowded spaces.

People are crazy. This has always been true but they’ve found each other on social media. For so long, these crazies would only meet each other inside of insane asylums and then Facebook came along and suddenly they were all able to bounce their asinine ideas about the world off each other in real-time and find like-minded morons and now here we are six months into a pandemic with ICU doctors running marathons in masks to prove that masks are safe.

No, Ashleigh and Todd, the mask won’t hurt your oxygen levels. You’ll be just fine. Wear the damn mask. Unfortunately, no amount of evidence and proof in the world will convince some people to change their minds because they’ve been so poisoned into believing their right by the feedback they get from like-minded idiots on social media.

To donate to this ICU doctor’s Gofundme and learn more about his endeavor as well as see the videos from his run you can click right here to visit that page.