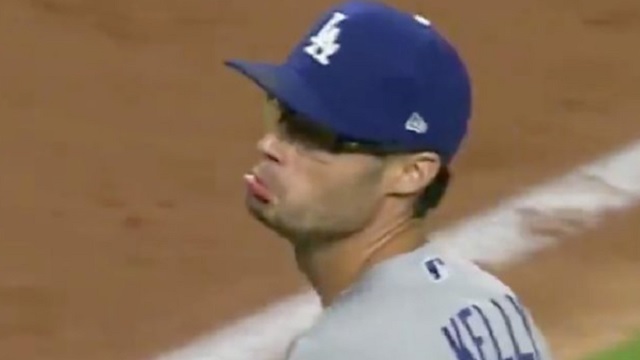 The MLB has dropped the hammer on Dodgers pitcher Joe Kelly.

And there we have it

THIS IS GETTING WILD pic.twitter.com/Kd4zgjKzBj

Kelly would go on taunt Correa after striking him out by yelling “nice swing, bitch” ‘you gotta cheat to hit” followed by several other expletives which led to the benches clearing.

THINGS ARE POPPING OFF IN HOUSTON pic.twitter.com/eLuViD1HMz

On Wednesday the MLB announced they were suspending Kelly for eight games for his actions.

Breaking: MLB has suspended Dodgers reliever Joe Kelly for eight games stemming from Tuesday night’s actions against the Astros that led to the benches clearing.

Kelly will appeal the decision. pic.twitter.com/aDxEILZqzT

Obviously the Internet thought the MLB was being a bit harsh

Wait, so the @Dodgers Joe Kelly gets suspended 8 games & Manager Dave Roberts gets a 1 game suspension….

Yet, the team w/ the one of the biggest cheating scadals in MLB history had ZERO players suspended for that situation. Gotcha.

Is this some sort of kangaroo court? pic.twitter.com/qm5dT2JVhu

Los Angeles Dodgers reliever Joe Kelly has been suspended eight games. In announcing it, MLB referred to Kelly's past history with intentional throwing, the fastball that buzzed Alex Bregman and his taunting of Carlos Correa.

Joe Kelly suspended for more games for *not hitting anyone* with a pitch than any Astros have been suspended for cheating their way to the World Series. https://t.co/w5EkacNj3K

If Rob Manfred had punished the cheaters, pitchers like Joe Kelly wouldn’t have to. The lamest commish could have stopped Tuesday’s sixth inning before it started

Joe Kelly gets suspended for 8 games

Carlos Correa, Jose Altuve and Alex Bregman will combine for wait for it… 0 games

Robert Manfred is making it so hard to like him

Rob Manfred is working as a mob underboss protecting the cheating 2017 Astros at all costs. Manfred just penalized Joe Kelly more than the entire roster of mama luke’s from Houston. Manfred is a co-conspirator in this fraud. https://t.co/VVqfOq6APx