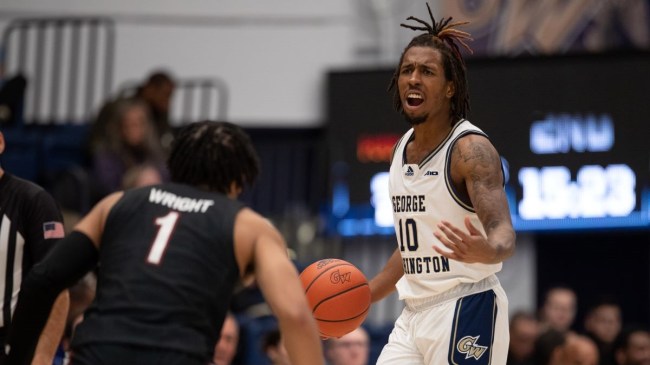 The 1990s were an absolute gold mine for incredible dog-centric movies. You had Beethoven, Homeward Bound, 101 Dalmatians and, of course, the GOAT: Air Bud.

For some reason, those movies don’t seem to get made anymore.

The two teams had barely even begun their matchup before an over-eager pup decides that this was his moment the shine. The dog came rushing onto the court, seemingly startling one of the of Colonials’ players.

A dog just ran on the court in the GW game?? pic.twitter.com/kT1YDLCrOf

Dog runs on the court during American vs George Washington game 🤣 pic.twitter.com/aRiNqqRbix

Unfortunately, the good boy (or girl) was not allowed to get any shots up before it retreated off the court. But Twitter was all-in on the situation.

He’s definitely got that dog in him.

Though not all of the players do.

The two guys afraid of that loving little dog definitely do not have dog in them https://t.co/14h4wz2ASO

Some fans even felt the dog should get a tryout with their team.

Mizzou could use this defense https://t.co/DPrNA5vZBC

Though others tapped more into their Cruella De Vil side.

Dog needs to be ejected and banned from all NCAA arenas https://t.co/WxofnakM4J

The outside interference appears to have helped the Eagles, who moved to 7-2 on the year with a 69-64 victory. While the Colonials dropped to 5-4 with the loss. But honestly, we’re all winners on this day. Especially the good boy (or girl!) that had his (or her!) brief brush with fame.

Dream big, kids. You, too, could be a star basketball-playing dog.