This Good Dog Completing A 6-Day, 140-Mile Marathon Across The Sahara Desert Is My Motivation 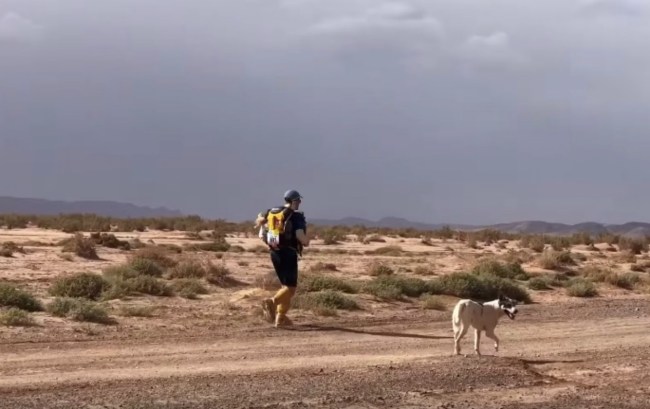 As you read this, the six-day, 140-mile Marathon Des Sables is taking place with runners pushing their bodies to unimaginable limits in the Sahara Desert. Ultramarathons might be the most extreme sport on the planet. They take all of the body-destroying aspects of running a marathon and they repeat it for several days until the runners push themselves to limits that people didn’t even know where possible.

This year, there’s a dog running alongside the competitors and he’s crushing it. The dog is named Cactus and he’s become the start of this year’s 140-mile Marathon Des Sables. If this sounds like torture that’s just your interpretation of the situation, by all accounts, Cactus the Pooch is loving this year’s Marathon Des Sables and he’s maintained incredible physical fitness throughout.

Here’s Cactus getting some much deserved R&R two days ago after finishing a grueling stretch:

After the third stage he was ranked 52nd overall:

Cactus has been loving this race every step of the way:

As for food, water, and relaxation, Cactus has been receiving special treatment at every checkpoint according to Extra Mustard/NYT:

He is being given water at checkpoints on the course and food by runners and officials at various places, including the campsite. The medical crew said he appeared generally healthy.

While dozens of human runners line up daily to have their battered feet attended to after long days in thick-sole shoes and gaiters to keep out the sand, Cactus appears to be doing fine in bare paws.

“No blisters, nothing,” Anthony Serena, a podiatrist, said.

In the early mornings, Cactus makes his rounds at the runners’ tents, posing for photographs and rolling over for belly rubs. Then he trots easily to the front of the starting line and takes off with the pack as AC/DC’s “Highway to Hell” blares over the loudspeakers. (via)

From what I’ve gathered, Cactus showed up on Day 1 and just joined the race. He’s a stray dog and is doing it for fun. I’d be STRAIGHT UP SHOCKED if one of the runners or race staff members doesn’t adopt this dog before this thing’s over.

He’s already spanned 100-miles of the 140-mile total course and you can track his progress here. Stage 5 is currently in progress, a marathon-length stretch, and the runners have already been traversing the Sahara Desert for more than 7 hours today (as of the time of writing).

I have always wanted to run a marathon at some point but haven’t ever taken the step of signing up and committing. Actually, I haven’t even been running much lately because all of my cardio has been on the stationary bike. 2019 might be my year to finally check ‘marathon’ off the bucket list. Any of you bros out there have suggestions on the best race?

For more on this, click here to visit Extra Mustard.