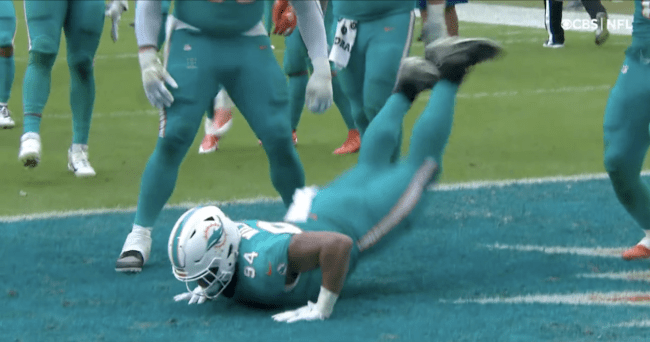 Dolphins defensive lineman Christian Wilkins stands 6-foot-4, 310 pounds, but don’t tell him that he doesn’t have hands. The 25-year-old, third-year player caught his second-career touchdown and celebrated in style.

During the fourth quarter of Miami’s game against the Jets, they faced 1st-and-goal from the one-yard-line. Wilkins came into the game and lined up as a fullback.

With that formation, it would be assumed that the Dolphins were going to let Wilkins clear a path up the middle for the running back. They did not.

Instead, Tua Tagovailoa took the snap, dropped back in the pocket, and narrowly escaped a New York defensive lineman. He looked to his left and found one of his own defensive linemen all by himself in space for the touchdown.

Wilkins went bursting out of the backfield and broke to the near pylon. He had a step on the defense, Tagovailoa dropped the ball into his outstretched arms, and Wilkins held on for six.

After finding pay dirt for the second time in his career, Wilkins celebrated in style. He ran to the stands and did the “Hard Rock Hop,” jumping over the barrier and into the nearest suite behind the end zone.

Once he made his way back onto the field of play, Wilkins continued his celebration tour by getting onto the ground and hitting ‘The Worm.’ It was a thing of beauty.

The Thicc-Six touchdown put Miami ahead by seven, but regardless of the score, Wilkins’ moment in the sun will forever live in history. What a showman!