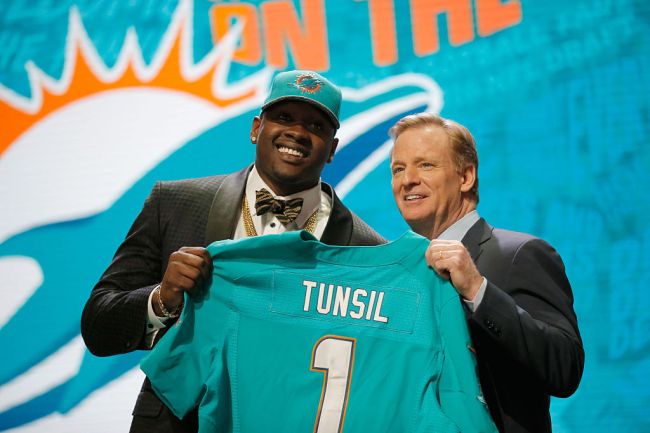 Laremy Tunsil was the consensus No. 1 offensive line prospect in the 2016 NFL Draft and was slotted to be a top-five pick, if not the first overall. The 6-foot-5, 315-pound left tackle out of Ole Miss was someone you could immediately plug in on the blind side and trust to protect your quarterback for his entire career. It was a no-brainer.

However, as the 21-year-old geared up for what was supposed to be the best night of his life, things came crashing down fast. Tunsil’s social media was hacked (probably by his step father, but that’s another story) and a video was released of him smoking out of a gas mask bong during his freshman year of college.

U couldn't do that off air. Smh

In addition, his instagram profile posted screenshots of his conversations with college coaches. Among them, Tunsil asked for direct financial assistance for rent and utilities— something that is strictly prohibited by the NCAA. The screenshots resulted in a deep investigation into the Ole Miss football program, and subsequent penalties.

While it was not a good look (everybody does it, relax) for the university, it was an even more difficult situation for the potential top pick in the draft. Things started spiraling quickly as the social media hack became public. Tunsil saw his name continue to drop and watched other tackles come off of the board before him. Eventually, with the No. 13 pick, the Dolphins called his name. While the NCAA went into Oxford and made a partisan example out of Ole Miss, Tunsil and his agent claimed to be hacked and the NFL declined to issue penalties. He wasn’t supposed to be there with the 13th pick, so Miami was thrilled, and Tunsil went on to start 44 games in three years for the team.

As Tunsil’s rookie contract came up in 2019, the Dolphins weren’t entirely sure that they wanted to spend the fortune he deserved to resign him. Instead of doing so, they traded him (and a few others) to Houston. Because of Bill O’Brien’s incompetence, they received a haul.

Miami selected cornerback Noah Igbinoghene out of Auburn with the first-round pick in 2020 and was set to draft third this year with the pick from a terrible Houston team. But they weren’t done there.

The 2021 NFL Draft has a deep quarterback class, and teams are willing to pay the price to get their guy. Friday saw the Dolphins’ front office take advantage of that notion and they made two blockbuster trades that shook up the draft order this year and for the years to come.

It started when Miami dealt Houston’s No. 3 pick to San Francisco for the No. 12 pick, a third-round pick and first-round picks in 2022 and 2023. And then the organization sent its newly-acquired No. 12 pick and the 2022 first-round pick to Philadelphia for the No. 6 pick this year. The two big moves on Friday were only possible because of the Dolphins’ decision to trade Tunsil instead of resigning him. Tunsil has been one of the best, if not the best tackle in the league, but when you put all of the moves together, his move to Texas returned a huge payout. To summarize:

For Tunsil to have fallen 10+ picks over something he did at 18 or 19 was ridiculous, but the Dolphins are the better for it. Their “controversial” pick of a guy who smoked some bud returned them a series of draft picks that could will define the franchise’s foreseeable future.

After today, Dolphins have some serious draft capital: pic.twitter.com/gun5mNnhTN

The butterfly effect which stemmed from a wicked smoke sesh could change the scope of the NFL all together and that’s crazy to think about.

While you’re here, remember when Laremy Tunsil caught a touchdown pass from Chad Kelly in a blowout Sugar Bowl victory over Mason Rudolph and Oklahoma State? Remember when he ran off on the plug to celebrate?

I sure do. Hotty Toddy.