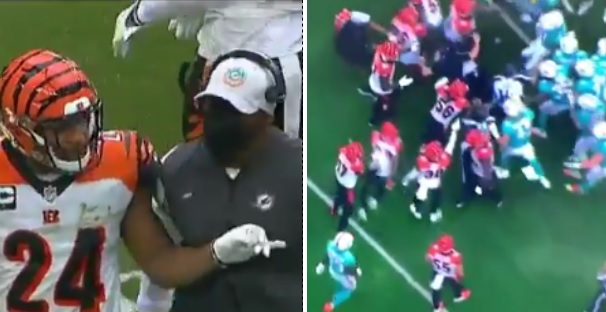 Things got heated between the Dolphins and the Bengals on Sunday.

In the fourth quarter Bengals wide receiver Mike Thomas laid out Dolphins punt returner Jakeem Grant before he could field the punt.

benches are clearing after another dirty hit on jakeem grant pic.twitter.com/O91L0cBNWA

An angry Brian Flores immediately ran onto the field to confront Thomas over the hit.

Brian Flores wanted a piece of that. pic.twitter.com/T78VQyunPi

A benches-clearing brawl between the two teams broke out and multiple punches were thrown.

Dolphins not happy about Jakeem Grant getting hit twice on cheap shots. Coming to his defense. pic.twitter.com/rThO3i3CBF

Shawn Williams, DeVante Parker and Mack Hollins were the players who were ejected from the game.