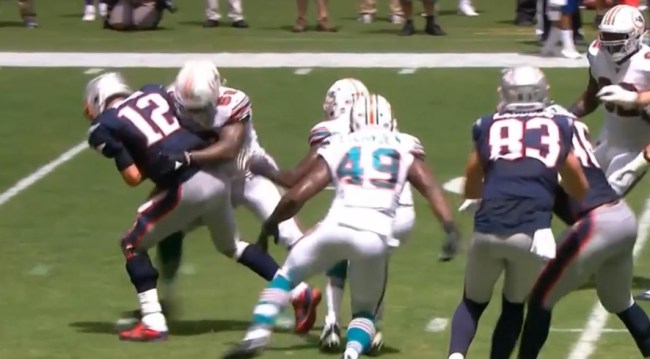 Are the refs being extra protective of Tom Brady?

After Sunday’s game, Dolphins linebacker Raekwon McMillan told a few Miami Dolphin beat reporters that a ref told him to “stay off” Tom Brady after a perfectly legal hit.

Raekwon McMillan told me when he hit Brady on Sunday – a perfectly legit hit – the referee told him "Stay off Tom." NFL still protecting those QBs amid several early season injuries to marquee ones

#Dolphins LB Raekwon McMillan, who played edge rusher for the first time and got a hit on Tom Brady, said referees "told me to stay off Tom" during Sunday's game. McMillan said refs were advising him so he wouldn't get a roughing the passer penalty.

This appears to be the hit in question. As you can see in the video McMillan was able to get a clean lick on Tom Brady as Brady was throwing the ball.

Of course, the Internet conspiracy theorists came out of the woodwork to claim that the league is trying to protect the golden boy Tom Brady.

This is why all players don’t hit him. He’s the leagues golden boy man. I have another word for it:

This was called roughing the passer with the Chiefs up 21-17 with 7 minutes to go. Would have been a 3rd and 7, instead 15 yards and a first down. Not the first time the refs have bailed out Brady/the Patriots. pic.twitter.com/VK245aQPfP

Would make me want to hit him all the harder. I mean at this point, a 15 yard penalty is laughable given Miami's certain 0-16 future record. Would be worth the fine to me.

The Patriots didn’t need any ref interference to beat the Dolphins, but they still didn’t take any chances. This league is such a joke.

The NFL is ran around the Patriots and their owner Robert Kraft. Let’s not forget it was him who convinced the rest of the owners to get on board and vote for Goodell as commissioner. Ever wonder why they always seem to play the best teams at home with a cake walk regular season?