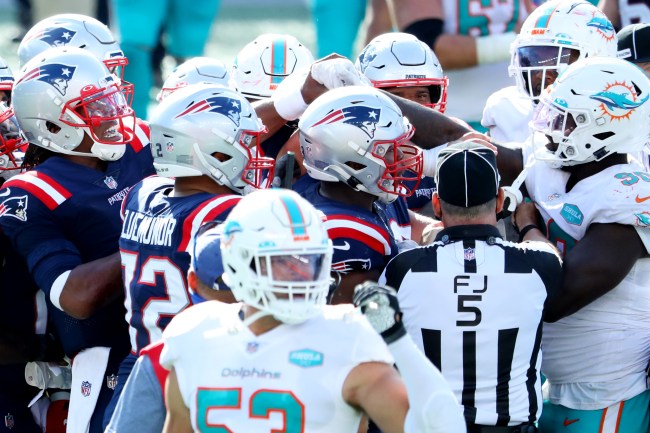 The Miami Dolphins-New England Patriots rivalry is still alive and well even after Tom Brady left the Pats this past offseason.

After Sunday’s game, Pats QB Cam Newton got into a heated altercation with several Dolphins players which led to defensive tackle Christian Wilkins trying to rip the chain off Cam’s neck.

Newton addressed the chain-snatching incident while speaking to the Greg Hill show after the game.

From where I am from, that’s just a sign of disrespect,” he said. “I am all about keeping everything within the confines of the game. … Good thing I went to a good jeweler and got the credentials. They didn’t do too much damage.”

Newton added: “On a serious note, it is a chain that has all of my children and their birthstone on it. You could only imagine for all the fathers that’s out there any type of sign disrespect for that chain. I don’t wear chains to represent my hood, which I should. I don’t wear chains with thug life on it, Superman, or things like that.

“… I am not a big person of tattoos, so I try and get anything that commemorates something that’s dear to my life on something that I can wear. It’s truly dear to me. So the chain that they tried to pull was the one that had each and every child that I have and their birthstones.”

On the Dolphins player ripping his chain:

Newton, on WEEI: From where I'm from, that's a disrespect…Good thing I went to a good jeweler and got the credentials. They didn't do too much damage… It's a chain that has all my children and their birthstone.

Newton then took a shot at the Dolphins with an Instagram post captioned “tried to snatch my chain and the game, too bad I got both.”

Dolphins players Shaq Lawson and Raekwon Davis both fired back at Cam on IG over his post.

The week 15 game between the Dolphins and Patriots just got a little more interesting.