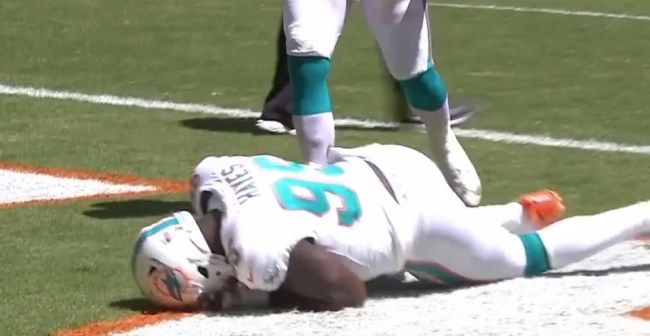 Hayes was injured in the second quarter of yesterday’s Dolphins-Raiders game when he sacked Derek Carr and tried to not land on top of the Raiders QB to avoid getting flagged for a roughing the passer penalty which states that players can get penalized for “landing on a passer with all or most of his body weight”.

#Dolphins coach Adam Gase says DE William Hayes, who has 2 sacks, is out for the season with a torn ACL. The injury occurred the he was trying to not put his bodyweight on the QB.

Here's the injury that happened to William Hayes.

He's out for the season because he tried to obey a ridiculous rule. pic.twitter.com/jomoaGI8MP

Several NFL players took to Twitter to blast the new rule for thinking about QBs and not the defensive players.

They don’t care about the rest of us getting hurt. Long as the QB is safe https://t.co/ihjlz3lVQl

Can they make a rule change now for this? Should be a penalty on QB and a fine because defender is trying to avoid putting weight on him and tears his AClL!! This just proves how dumb the rule is and how little NFL cares for position players…. https://t.co/KyI7YwIi0s

This is very true. If a QB got hurt they would create a new rule today