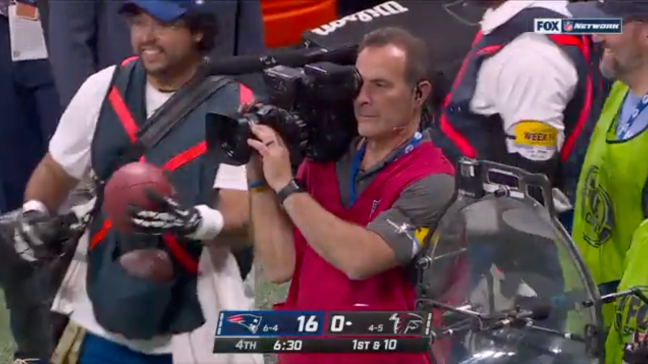 Nick Folk had himself an evening during Thursday night’s football game between the Patriots and the Falcons.  The 37-year-old knocked in kicks from 32, 44, 53 and 33, but he was not the best performer of the evening.

During Folk’s third kick of the game, a cameraman did his job better than anyone else on the field. As the kick came through the uprights and directly at his head, he stood strong and got the shot.

The man on the other side of the lens is a Hall of Fame handheld camera operator. Literally.

Don Cornelli has worked on NFL broadcasts for three decades and has also been on the sideline covering the NBA, MLB, NHL, NCAA, PGA, NASCAR, the Olympics and the World Cup. He has done it all and has filmed some of the greatest shots in sports history.

Cornelli was in the right place at the right time for Plaxico Burress’ game-winning touchdown during Super Bowl XLII and captured Kris Jenkins’ game-winning shot during the 2016 NCAA Men’s Basketball National Championship. Because of his greatness with the handheld, Cornelli is being inducted into the Sports Broadcasting Hall of Fame next month— becoming on the the fourth camera operator to join the prestigious club.

On Thursday, he shot the greatest POV video in field goal history.

"He has a way of always being in the right spot."- Troy Aikman

"That's what gets you in the Hall of Fame. That's what the great ones do."- Joe Buck pic.twitter.com/99IDqZ5dX8

Here is another look:

Here’s how it looked live, including a replay from Don Cornelli’s camera.

Cornelli even got a shoutout from the broadcast:

After returning from commercial break…

Joe Buck on Don Cornelli: “But he just got hit by that football.”

He stood in, dug deep, and wore the kick to the head. All for the shot.