Using Government Data, Someone Figured Out That Trump’s Golf Expenses Make Him The 10th Highest Paid Athlete In America 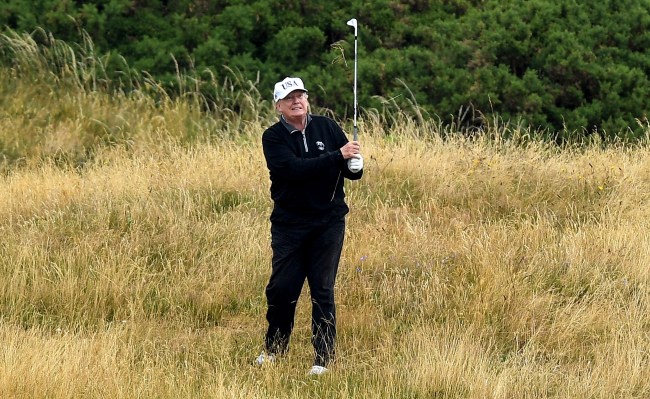 If there is one thing that’s been consistent with recent Presidents of the United States, regardless of political party, it’s that they sure love a good round of golf.

From William Howard Taft to Donald J. Trump and many in between, hitting the links has long been a favorite pastime for the leader of the free world.

Last February, Golf Digest took on the task of ranking the best golfing Presidents from 1 to 16.

Calvin Coolidge brought up the rear with Golf Digest pointing out that when he vacated the White House, he left his clubs behind. While their top five golfing Presidents were (5) Franklin D. Roosevelt (pre-polio), (4) Gerald R. Ford, (3) Dwight D. Eisenhower, (2) John F. Kennedy, and (1) Donald Trump.

Of course, some Presidents enjoy golf more than others. For instance, during his two terms in office Barack Obama played more than 330 rounds.

The most prolific golfing President, however, might just be our current one, Donald Trump. The man does own several golf courses after all.

Those rounds don’t come cheap though.

If you think the greens fees are high when you play 9 or 18, it’s a mere pittance of what it costs every time Trump gets in a round.

According to The Root, which used the numbers from the Government Accountability Office, it costs taxpayers about $600,000 per round of golf for President Trump.

I wonder what that amounts to per shot.

Since 2016, federal government departments have spent about $130 million for Trump to hit the links. That doesn’t include another $13.8 million incurred in local security costs that the federal government reimbursed to the city of Palm Beach through spring 2019. If you extrapolate those costs to today’s date, the total local and federal costs for Trump’s athletic endeavors total $152 million or roughly $50.6 million per year for Trump to play golf. In the three years since Trump became president, no billionaire team owner, no sports organization, no company has paid a human being more to play golf.

Then, using Forbes’ list of highest-paid athletes, they determined that 45 would tie for 10th overall with Los Angeles Angels outfielder Mike Trout.

I don’t know about you, but regardless of how you feel about Trump, Obama or any other Commander-in-Chiefs’s politics, considering the fact that the President of the United States is arguably the most powerful person in the world, and makes a salary of $400,000, he or she should at least be able to add in some perks to make their total earnings at least commensurate with a three-time American League MVP.

Somebody really needs to get Bush, Clinton, Obama, and Trump together for a televised game of Skins while they’re all still able.