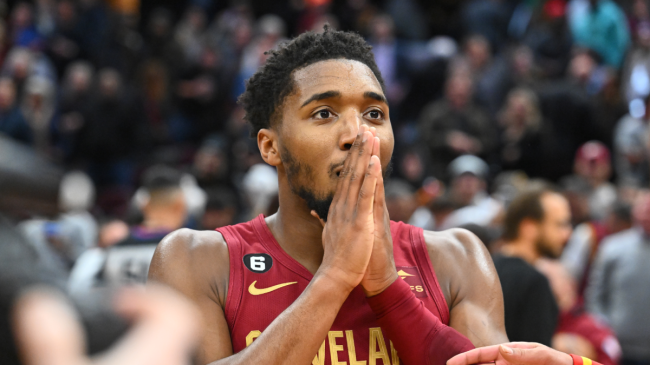 Donovan Mitchell caught some heat from a couple of teammates after he unknowingly stole Evan Mobley’s opportunity at a double-double.

In the Cavs’ matchup with the Hawks, Spida recorded a rebound on the game’s final shot. Time expired shortly after the board was pulled down, ending the game. While Cleveland won the contest 114-102, there were a few Cavaliers unhappy with how the game closed.

Jarrett Allen was spotted staring Mitchell down as he dribbled out the final few seconds of play. Spida quickly realized what had happened at the conclusion of the matchup, but at that point, it was too late.

Mobley sat at nine rebounds on that final possession, and he had an opportunity to make the easy rebound on a missed Atlanta shot to close out the game. Unfortunately, Mitchell swooped in from the opposite side of the paint and snagged the board from Mobley’s grasp.

He didn’t realize that he’d just stolen a double-double opportunity from his teammate as Mobley had also tallied 10 points on the night. It would’ve been the forward’s third straight double-double, and fourth in his last six games.

After coming to the realization that he’d ruined Mobley’s streak, Donovan Mitchell publicly apologized online. He posted the following tweet on social media, joking about the accidental theft.

Mitchell likely caught a bit more flak in the locker room, and he definitely owes one to the Cavs’ power forward. As it turns out, Mitchell also narrowly missed out on a double-double in Monday night action after recording 29 points and nine assists. He seems to be enjoying his first season in Cleveland as he looks to get the Cavs to the NBA playoffs.

Related: NY Mets trolled for wishing Donovan Mitchell a Happy Birthday after he spurned the Knicks in trade talks