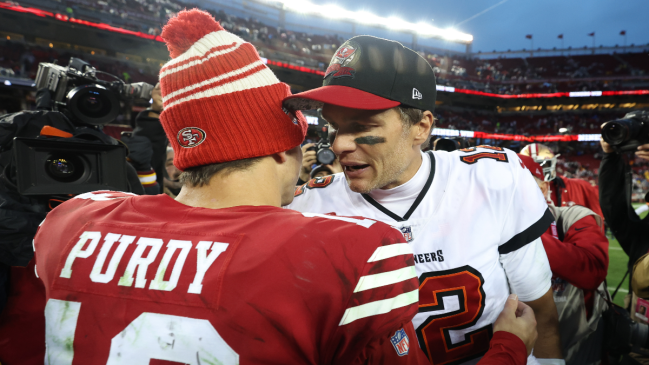 Tom Brady’s Hall of Fame NFL career is something that you couldn’t script even if you tried.

Taken with the 199th pick of the 2000 NFL Draft, Brady got his chance to start after an injury to Patriots QB Drew Bledsoe and never look back.

He’d go on to win seven Super Bowl rings and break just about every record there is in the book. It’s a remarkably unlikely story.

And it could happening all over again.

Enter San Francisco 49ers quarterback Brock Purdy. The Niners selected Purdy with the 262nd and final pick in the 2022 NFL Draft. Much like Brady, he had a good yet not spectacular college career.

Also like Brady, he took San Francisco’s starting job after injuries to Trey Lance and Jimmy Garoppolo. All Purdy has done since that point is go 7-0 with 1,920 yards, 16 touchdowns and four interceptions. San Francisco is on the way to the NFL Championship Game against the Philadelphia Eagles and Purdy is on the cusp of doing something very, very special.

We’re not saying he’s necessarily a Brady regen. But others are…

Safety Donte Whitner spent three seasons with San Francisco from 2011-2013. He made the Pro Bowl in each of his last two seasons with the organization and played in the Super Bowl in 2013.

Now Whitner serves as an analyst for NBC Sports Bay Area, and he’s got some incredibly high praise for the Niners’ young quarterback.

"Brock Purdy is the second-coming of Tom Brady."@DonteWhitner came with an extra spicy take this week 🌶️ pic.twitter.com/ESvS11tqNR

“Hear me out. Hear me out. Brock Purdy is the second coming of Tom Brady,” Whitner began. “Now listen to me, if Brock Purdy takes the 49ers to the championship and ultimately brings the Lombardi Trophy back to the Bay Area, I think that we can go ahead and crown him as the starter for the 49ers for the next decade. Think back to when Tom Brady replace Drew Bledsoe. A $100M contract. Now it’s going to be Brock Purdy replacing Trey Lance and the No. 3 pick. But it’s all predicated on the next two ballgames. Brock Purdy is the second coming of Tom Brady.”

We love a spicy take, but this one is truly turning up the heat. Those are some big shoes to fill, but somebody has to do it. Why not Brock Purdy?